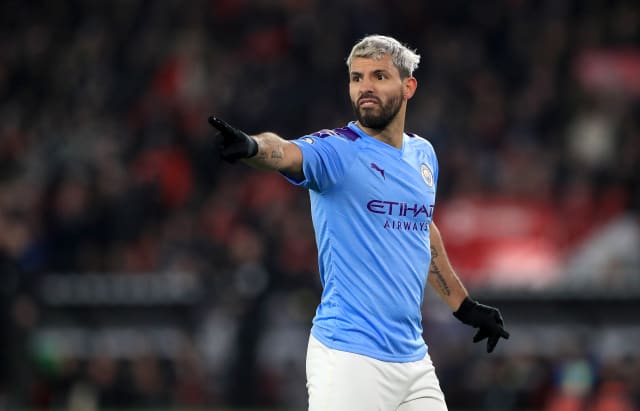 Here, the PA news agency looks at some of the best examples from May 7.

Manchester City striker Sergio Aguero will make his Formula One Esports bow in Sunday’s virtual race at the Circuit de Catalunya in Barcelona.

Aguero will be part of the Red Bull team alongside Alex Albon, who won last weekend’s Brazilian Esports Grand Prix after a race-long battle with Ferrari’s Charles Leclerc.

Aguero told the Red Bull Racing website: “Motorsport is a great passion of mine so to be given the opportunity to take part in the Virtual Spanish GP is very exciting for me.

“This takes it to the next level and gives me the opportunity to race and compete against real F1 drivers – I can’t wait!”

The Premier League, Sport England, the Football Association and the UK Government have launched the Pitch Preparation Fund providing £9.56million to grassroots clubs struggling to maintain their football pitches.

Chelsea manager Frank Lampard called an NHS doctor who has been working on the front line.

London Ambulance Service staff, up to 180 paramedics and non-paramedics who operate in the local area, will now use Selhurst Park for rest and meal breaks while on duty, with Crystal Palace club chefs providing hot meals and refreshments.

Crystal Palace director of operations Sharon Lacey said: “We have been liaising with our local NHS Trust about ways we can support the health service during this time of crisis.

“We are delighted to be able to offer assistance to the London Ambulance Service crew, who are saving lives in our community. Providing them with somewhere to rest and a hot meal is the least we can do in the circumstances.”

Bournemouth’s players have kept in touch with their supporters during lockdown.

James Milner was among the Liverpool stars reminiscing a year on from their stunning Champions League semi-final comeback win over Barcelona.

The England and Wales Cricket Board launched an Emergency Loan Scheme which aims to support affiliated cricket leagues through the coronavirus crisis.

Nick Pryde, ECB’s director of participation and growth, said: “Leagues will be able to apply for a loan of up to £50,000 to cover a number of unrecoverable costs incurred for the 2020 season, as well as the cost of cricket balls purchased for the year.”

England seamer Stuart Broad has got a daily routine going.

Ian Poulter is hoping to get back on the course soon.

Meanwhile Eddie Pepperell has been showing off his culinary skills.