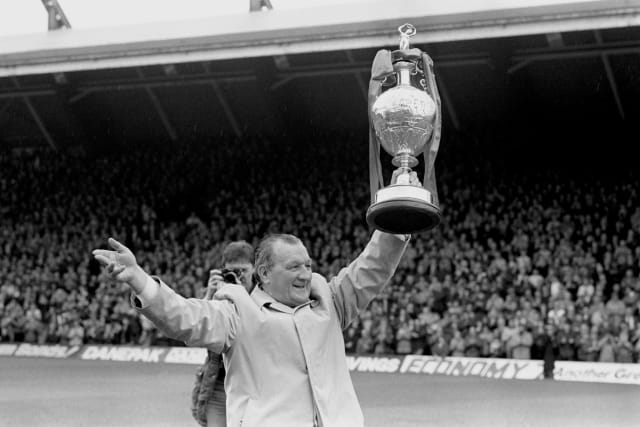 Liverpool manager Bob Paisley proudly shows off the League Championship trophy to the fans at Anfield, shortly before his retirement in 1983.

The picture was taken at the final home match of the Division One campaign, a 1-1 draw with Aston Villa on May 7.

The following week, Paisley was to retire at the age of 64, ending a 44-year run at the club in various capacities which started as a player in 1939.

A ball-winning left-half, he was part of the Liverpool team which won the league in 1946-47 – and when his playing career ended in 1954 he became part of the backroom staff at Anfield.

When Bill Shankly retired as manager in 1974, County Durham-born Paisley was chosen to take over first-team duties with the Reds.

Under him, Liverpool were English champions six times and also won three League Cups. The FA Cup was to elude him, although they did reach the final in 1977.

Paisley was equally impressive in Europe, leading the team to three European Cups, a UEFA Cup and a UEFA Super Cup.

Paisley was 77 when he died in 1996 and earlier this year a statue was unveiled in his honour outside Anfield.