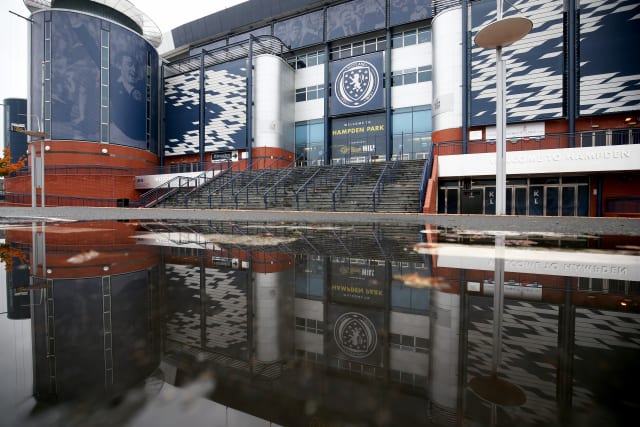 The Scottish Government was warned the future of football in the country is under threat during talks which confirmed a return to sporting action remains some distance away.

Sporting bodies were told the focus remains on slowing the spread of Covid-19 but minister for sport Joe FitzPatrick declared the conference call “constructive” and promised more meetings to discuss a “phased return”.

However, Scottish Professional Football League chief executive Neil Doncaster warned that financial support from government was needed with the game in “grave peril”.

While English football works towards a possible June return following talks with the UK Government, Scottish football representatives have named September as the most ambitious target and there are concerns there will be no fans allowed in grounds next season.

Doncaster said after the meeting: “We gave the minister a frank summary of the existential crisis our game is facing. Gate receipts make up a far higher proportion of our income than in England, which benefits from huge TV deals, so until we get back to playing in front of crowds, our game will remain in grave peril.

“It was encouraging to hear the minister recognise the social and health benefits of football in Scotland, which generates hundreds of millions of pounds for the Scottish economy annually.

“As sport is a devolved responsibility, we’ll continue to be guided by the Scottish Government’s health experts on when we are able to resume matches, but that looks to be some while away.

“We have already seen the UK Government pledging £16million support to Rugby League in England to prevent it from being devastated by Covid-19.

“The longer we are unable to play matches in Scotland, the more essential will be significant financial support for our hard-pressed national sport.”

FitzPatrick made no assurances over financial support immediately after the meeting but promised to keep working closely with sporting bodies.

The Dundee City West MSP said in a statement: “Everyone involved in these discussions recognises the importance of sport to many people in Scotland and wants to see it resume as soon as possible.

“We all agree that can only happen once it is safe to do so – and the focus at the moment must be the continuation of measures to slow the spread of the virus, protect the NHS and save lives.

“It’s important all organisations continue to share best practice and information as well as learning from other countries, as we have to develop a phased return for sport which reflects Scotland’s circumstances.

“I’m encouraged by today’s constructive initial talks and confident further partnership working will enable that to happen safely and at the right time.

“The group will maintain an open dialogue in the weeks ahead to share any relevant information and discuss phased return options.”

“We outlined the pragmatic steps that we believe can assist in safeguarding the survival of our clubs in the short term, and in the coming weeks help clubs emerge from lockdown and begin the process of preparing for the reintroduction of football,” Maxwell added.

“We also reiterated that supporters attending matches is a fabric of Scottish football, and integral to the match-day experience and future viability of the sport.”

The Scottish Rugby Union described the meeting as “positive”.

SRU chief operating officer Dominic McKay added: “This is an encouraging first meeting which generated constructive dialogue and a timely chance to collaborate with other sports.

“We would welcome the opportunity to meet again and agreed to share any relevant information and learnings we have with both Scottish Government and other sports to aid progress at this time.”

Sportscotland earlier confirmed that governing bodies would receive £16.4million – half of their annual public funding which comes from Scottish Government and National Lottery cash – in April/May in a bid to safeguard 1600 jobs.

Sportscotland chief executive Stewart Harris said: “We recognise the financial strain which many organisations, clubs and communities are under at this time and are committed to continuing our support to the sporting system.

“As such, we will continue to work with each sport and local partner to determine what further financial support may be required. It is vital that everyone works together to make sure we overcome the challenges faced across the sector.”