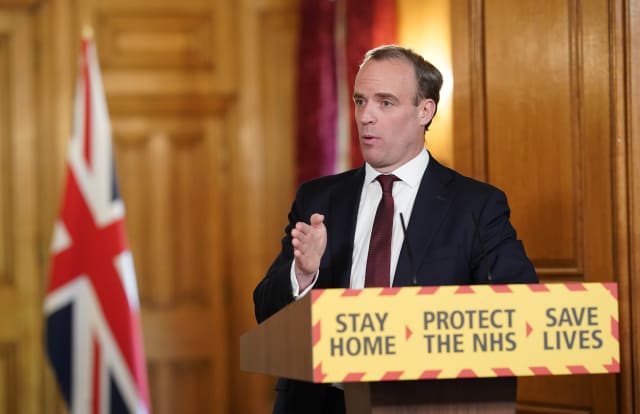 Government ministers are looking into the feasibility of sports being played behind closed doors as part of the “second phase” of the response to the coronavirus pandemic.

Foreign secretary Dominic Raab said the return of the Premier League would “lift the spirits of the nation” and confirmed officials are working on a plan to include a return of sport in the early stages of the recovery.

Raab’s comments came on the day that English Football League chairman Rick Parry warned the Digital, Culture, Media and Sport committee that the 71 clubs in his competition were staring into a £200million black hole.

Raab said: “I think people would like to see us get back not just to work and get to a stage where children can safely return to school, but also enjoy some of those pastimes, sporting in particular.

“I know that the Government has had constructive meetings with sports bodies to plan for athletes to resume training when it’s safe to do so.

“I can tell you that the Culture Secretary (Oliver Dowden) has also been working on a plan to get sports played behind closed doors when we move to the second phase, that’s something I can tell you we’re looking at.

“Whether it’s a combination of test, tracking, tracing and other social distancing measures within what’s possible within a sporting environment we want to see whether behind closed doors what the options are for doing that.”

Premier League officials are looking into various potential ways to resume and complete the current season, but players have reportedly expressed caution over the desire to schedule a return.

Meetings are due to take place next week at which medical specialists will outline safety protocols to players and managers.

And Raab admitted there are too many unpredictable elements to be able to say for certain in what form sports will be able to resume – and at what point fans will be allowed back into arenas in significant numbers.

He added: “I can’t look too far into the future because there are various different ways we can get control of the virus permanently, defeat it for good  – a vaccine is certainly one of those and therapeutics are another.

“I think, we are all waiting to see how effective internationally test, tracking and tracing can be  – I think that is also an option.

“Whether it is a combination of test, tracking and tracing and other social distancing measures within what is possible within a sporting environment, we want to see whether behind closed doors (is an option).

“So I think it is worth taking a close look at that, seeing whether it is possible to do it safely but as ever taking the scientific and medical advice as to when and how to proceed.”