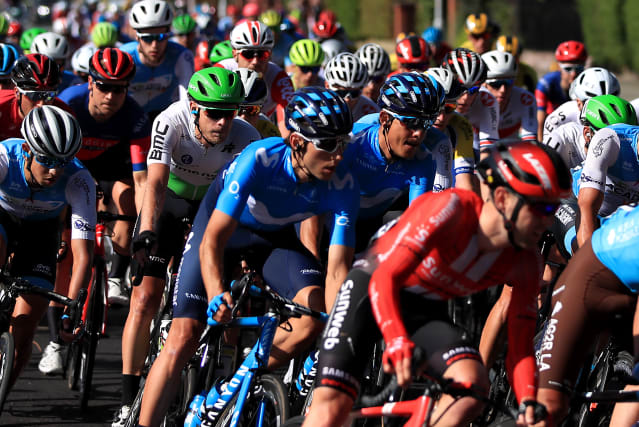 The Giro d’Italia and Vuelta a Espana are set to overlap in October as cycling’s governing body the UCI unveiled ambitious plans to squeeze as much of the 2020 WorldTour season as possible into three months.

The Tour de France remains on its previously announced dates of August 29-September 20, two months later than originally scheduled, while the Giro is now set to take place from October 3-25 with a shortened 18-stage Vuelta slated for October 20-November 8.

The plan will see racing resume with a men’s and women’s edition of Italian one-day race Strade Bianche on August 1, with the Vuelta the last race of the season. The accompanying women’s event, the Madrid Challenge by La Vuelta, would take place from November 6-8.

Though British fans already knew they had lost the Women’s Tour, originally scheduled for June, the men’s RideLondon-Surrey Classic retains its original August 16 date, which is now also the final date of a shortened Criterium du Dauphine.

The Tour of Britain, set for September, is not a WorldTour race so was not covered by this announcement, but organisers remain optimistic it can go ahead.

The clash between the Giro and Vuelta is just one of several notable overlaps as the UCI tries to cram more than 100 days of competition into a period of 15 weeks following a lengthy shutdown due to the coronavirus.

Two big races in Italy, the men’s Tirreno-Adriatico and the women’s Giro Rosa, overlap in mid-September, with both taking place at the same time as the Tour de France.

UCI president David Lappartient said: “We have drawn up a solid, attractive and varied new calendar that is as realistic and coherent as possible.

“This has been achieved as early as was practicable and in line with information available today concerning the evolution of the pandemic. Riders, teams and organisers now have the dates they need to anticipate the resumption of racing on 1st August.

“This is a very important step that the entire cycling community, financially impacted by the pandemic, has been waiting for to move forward.”

New dates for the Tour de France were announced in mid-April, although doubts persist over the race, with organisers already needing to adapt the opening stages after the French government said no mass gatherings can take place in the country before September.

In an interview with France Televisions, sports minister Roxana Maracineanu said no guarantees could be made with regards to the Tour.

“Many people beg me to keep the Tour, even behind closed doors,” she said. “I hope it will take place, but I’m not sure. It is still too early to say, we do not know what the epidemic will be like after lockdown.”

The UCI had originally planned to reveal its revised calendar last week but delayed the announcement after governments across Europe issued fresh guidance with regards to lockdowns.

Instead it came in a week when several professional riders based across Europe were allowed back out to train on the roads after several weeks under strict lockdown conditions.

Priority was given to rescheduling the Grand Tours and the five biggest one-day races, the Monuments, as well as the biggest races on the women’s calendar.

While there will be much focus on what has been lost in a truncated calendar, there is also some welcome innovation with a first ever women’s edition of Paris-Roubaix announced to take place on the same day as the men’s event – October 25.

However, given that is also now the final day of the Giro and stage six of the Vuelta on the Tourmalet, cycling fans may not know which way to look.