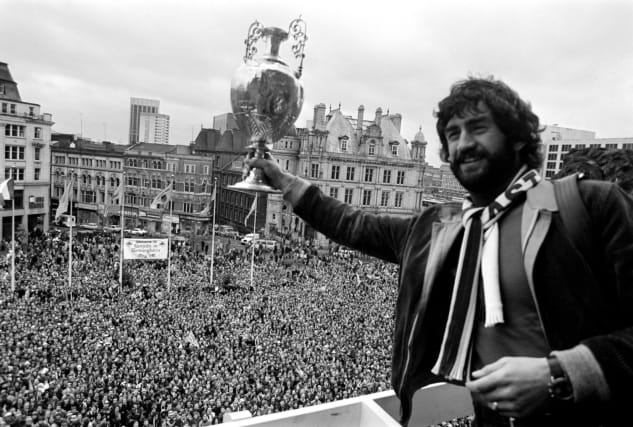 Aston Villa captain Dennis Mortimer shows the First Division trophy off to a crowd of thousands outside Birmingham Town Hall after the 1980-81 title triumph.

It was Villa’s seventh league championship but their first since 1910 and was sealed despite a 2-0 defeat against Arsenal at Highbury on the final day of the season.

Ron Saunders’ side pipped Ipswich to the summit by four points, with a seven-match winning run from January to March proving pivotal to their success.

Villa used just 14 players over the course of the campaign, with Mortimer one of seven that were ever-present. The others were Jimmy Rimmer, Kenny Swain, Ken McNaught, Des Bremner, Gordon Cowans and Tony Morley.

Mortimer, who had already lifted the League Cup with the club in 1977, went on to captain the Villains to the European Cup in 1982 with a 1-0 victory over Bayern Munich in Rotterdam.

Liverpool-born midfielder Mortimer made nearly 600 appearances in the Football League, which also included a spell at rivals Birmingham, but was never capped by England at senior level.