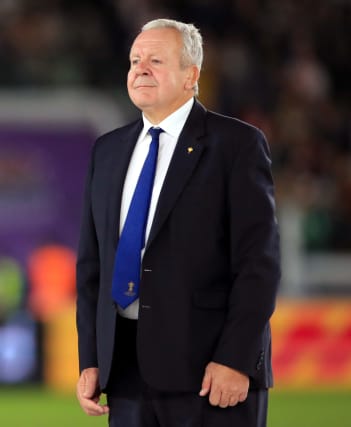 Sir Bill Beaumont insisted he had no time to celebrate his re-election as World Rugby chairman as he looks to guide to the sport through the coronavirus crisis.

Beaumont, who won a slim 28-23 majority in the vote ahead of his vice-chairman Agustin Pichot, said he wanted to see international rugby return as soon as possible.

“We have work to do,” the 68-year-old said. “We are tackling Covid-19 and must implement an appropriate return-to-rugby strategy that prioritises player welfare, while optimising any opportunity to return to international rugby this year in full collaboration with club competitions for the good of players, fans and the overall financial health of the sport.

“I am determined to ensure that the spirit of unity and solidarity that has characterised our work in response to an unprecedented global Covid-19 pandemic, is the cornerstone of a new approach that will deliver a stronger, more sustainable game when we emerge with new enthusiasm, a renewed purpose and an exciting future.”

Scottish Professional Football League chief executive Neil Doncaster says he is in the dark over Rangers’ claims they have “alarming” evidence regarding the vote which saw the Scottish league season terminated, with the Glasgow giants so far refusing to hand over any proof.

Rangers want to see Doncaster suspended after accusing the SPFL of “bullying” clubs into voting for the plan to end the three lower divisions and possibly the Premiership.

“It has been several weeks and we’ve had absolutely no idea what it was that we were supposed to have done wrong,” Doncaster told BBC Sportsound.

“We’ve had all sorts of rumour and innuendo, vague allegations but nothing specific. It’s not even a question of evidence. We don’t even know what the charges are.

“I’m hearing that this alleged dossier of evidence is due to be circulated this week. We look forward to seeing what’s in it because the sooner we can get this dealt with and move on the better.”

Cycling’s European Road Championships will not take place this year due to the pandemic, the European Cycling Union has said.

The event was due to take place from September 9-13 this year, dates that clash with the rescheduled Tour de France. Trentino, which had the hosting rights, will instead stage the event in 2021.

Cycling’s world governing body the UCI intends to issue a revised schedule for the 2020 road season on Tuesday.

The UEC said it would work with the UCI and national federations “to look at the various alternatives for the 2020 European Road Championships and UEC calendar events this season so that all titles in each category can be awarded in all disciplines”.

Olympic rower Polly Swann has joined the fight against coronavirus as a junior doctor as she continues to train for the postponed Games in Tokyo.

Swann, who took silver in the women’s eight in Rio four years ago, previously completed her medical degree and the 31-year-old has now joined the NHS to help the fight.

“A lot of junior doctors have been moved to the most critical parts of the NHS, so interim foundation year doctors are backfilling their roles,” Dr Swann said.

“I’m definitely not a frontline ICU worker, but I’m glad I can still help to ease the burden in some way.”