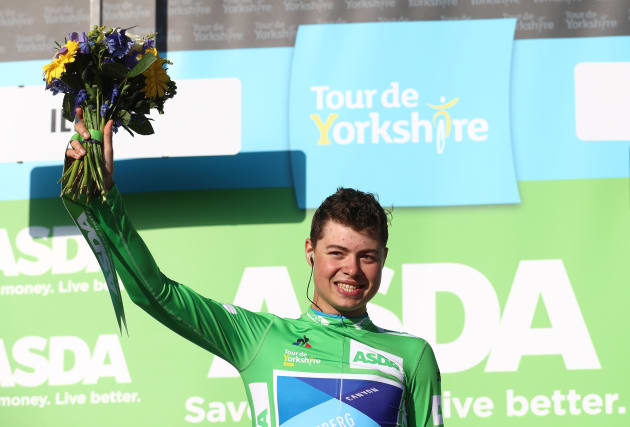 Almost two years to the day since he became the first Yorkshireman to win a stage of the Tour de Yorkshire, Harry Tanfield is finally finding time in lockdown to frame his jerseys.

As he stood on the podium in Doncaster in 2018, the Great Ayton-born rider laid out plans to redecorate his walls with three new colours – the race leader’s blue, the points leader’s green and the most active rider’s grey he had just won.

The coronavirus pandemic means there is no Tour this weekend, but it is giving Tanfield a chance to look back.

“With all this going on I’ve had a bit of time and I remembered I’d ordered an A2 frame,” Tanfield told the PA news agency.

“Literally two days ago I put the green jersey into the frame to see how it looked and I managed to get it in, so I’m going to order another two off eBay.”

It will be a memento of a dramatic day, when Tanfield defied the odds to win from a breakaway as the peloton barrelled down the road behind.

For Tanfield and his Canyon-Eisberg team-mates, getting into the breakaway and securing their sponsors some TV time was non-negotiable – “If you miss the breakaway you’re getting your b***s chopped off” – but beyond that Tanfield had his eye on grey.

The opening kilometres of a stage can be chaotic and for anyone targeting a breakaway, choosing the right move involves a large dose of luck as well as judgement.

But after getting away together with fellow escapees Alistair Slater, Mike Cuming, Emerson Oronte, Tom Baylis and Axel Journiaux as the race looped round Hornsea, Tanfield pushed on as the race swung west, back through Beverley and then on to the Wolds.

It was all going according to the bunch-sprint script as what had been a five-minute advantage was trimmed to 60 seconds with 10km to go.

“It came on race radio with about six kilometres left that I’d won the grey jersey,” Tanfield said. “I thought, ‘Mint, I can sit up now, chill and maybe drop back to the bunch’.”

But as they passed through the south eastern edge of Doncaster, they turned on to a smooth new road and found a headwind had become a tailwind.

“He was shouting at me on the radio saying the gap’s holding, we’d still got 30 seconds on the bunch. So I was screaming at the other guys, ‘Ride, ride, we’ve all got to ride’.”

The five remaining riders were exhausted but Tanfield dug deep to do the longest turns.

“I was worried I was doing too much, but whenever I went to the front the pace went up,” he said. “I’d rather the others do short turns if it keeps the pace up. If we’d been caught in the last kilometre I’d never have forgiven myself.”

Tanfield finished his last pull with 500 metres to go. He was looking over his shoulder for the fast-approaching peloton when Oronte launched his sprint 400 metres out.

The others followed but, perhaps in the excitement, everyone had gone too soon. Tanfield, drafting on from the back, could cut through a gap in the middle.

“I was going over the chevrons, the bike was bouncing everywhere,” he said. “And then I celebrated for a zebra crossing I thought was the finishing line.”

No matter. The others could not match his speed in the final metres. Tanfield had taken the biggest win of his young career, a victory which would help him progress to the WorldTour, first with Katusha-Alpecin in 2019 and now with AG2R La Mondiale.

“I just couldn’t believe it, I thought, ‘What just happened?’ he said. “I was just shaking. I was saying ‘I’ve won the grey jersey!’ and one of my team-mates was like, ‘Mate, you’ve won every jersey’.”