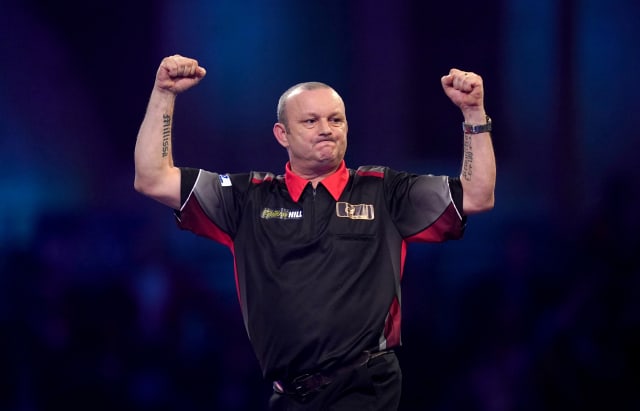 Darren Webster booked his spot in the next round of PDC Home Tour with a clean sweep of wins in Group 15.

Webster made sluggish starts against both Bradley Brooks and then Scott Baker but managed to rally to victory before a more authoritative performance over 2012 World Championship finalist Andy Hamilton.

Webster revealed ahead of his first appearance in the competition that he is being helped through the coronavirus-enforced lockdown by mental health charity Sporting Chance.

“I’ve struggled in lockdown with what I’m like,” said Webster, who has suffered with a number of physical and mental issues in his career.

“I’ve struggled to even practice but I made sure I got home and practised and I’m pleased I played.”

The 51-year-old from Norwich missed a dozen darts at a double as he fell 3-0 down in his opening match against Brooks, who revealed he was taking part in the tournament from his mother’s bedroom.

Brooks looked to be on the verge of a surprise win when he went 4-1 ahead but Webster recovered impressively, reeling off four legs in a row to prevail 5-4.

Hamilton, back with the PDC after two years with the BDO, led throughout against Baker but was then pipped at the last as the second match of the night also went to a decider.

After Hamilton rebounded with a comprehensive 5-1 win over Brooks, Baker seemed to carry the momentum from his first win into his clash against Webster, claiming the first two legs.

Once again, though, Webster was able to come storming back winning five consecutive legs to wrap up an ultimately comfortable 5-2 triumph.

Brooks avoided a clean sweep of defeats by beating Baker 5-1, despite averaging 90.03 to his opponents’ 93.46.

There was no slow start from Webster in the final match of the night although his struggles with the doubles continued as he missed six times which would have seen him move 4-1 up.

However, Hamilton could not capitalise and Webster sealed a 5-3 win.