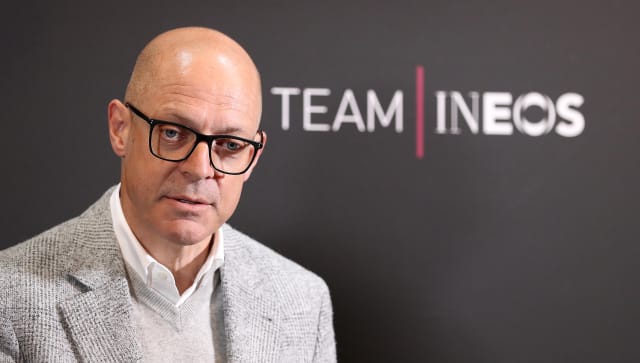 Rival manager Bjarne Riis has accused Team Ineos principal Sir Dave Brailsford of being “selfish” in suggesting he would withdraw his riders from a rescheduled Tour de France if he did not feel adequate precautions had been taken against coronavirus.

Speaking after the announcement that the Tour had been postponed by two months, Brailsford told the Guardian that Team Ineos would “reserve the right to withdraw should we deem it necessary”, calling for a “sensible, responsible and reasoned approach” amid the pandemic.

Team Ineos were far from alone in withdrawing from racing prior to the suspension of competition, with seven of the 19 WorldTour teams choosing not to take part in the last major race to take place, Paris-Nice in mid-March, citing concerns over the welfare of riders and staff.

Ineos were also dealing with the sudden loss of their sporting director Nico Portal at the time.

But Riis, team manager of NTT Pro Cycling, said cycling must be united in its response in order to safeguard the future of the sport, saying teams should accept the guidance of authorities if they deemed it safe for events to go ahead.

“I cannot imagine (Tour director) Christian Prudhomme would want to stand at the head of the Tour not feeling it is safe,” the Dane said. “I know him well enough to know he will not do that, the UCI will not allow it.

“I trust these people to have the right authorities behind them and take the right decision. We should follow that. I disagree with Dave Brailsford when he said we should decide if it’s safe or not.

“It’s not up to him to decide…Now is the moment cycling should stick together by doing the right thing and not thinking of yourself in terms of what is best for your team, but what is best for the sport.

“I think the UCI, the teams, the riders should stick together…and do what is best for cycling and not just individuals. I gave the example of Brailsford before and I was not very happy about his comments because I think it was selfish.

The Tour de France has been rescheduled to start on August 29, but remains in clear doubt given the ongoing uncertainty about when it will be deemed safe to lift the lockdown regulations in place in different countries around the world.

A number of health experts have raised concerns over the race going ahead, with Devi Sridhar, chair of Global Public Health at the University of Edinburgh, calling it a “recipe for disaster” earlier this month.

The UCI on Wednesday delayed plans to announce the rest of a revised calendar for 2020 until next week after governments across Europe issued fresh guidance on social distancing.

The French government has said no mass gatherings can take place before September, but clarified the Tour could still go ahead on its scheduled dates if the opening stages are managed correctly.

Organisers ASO have previously ruled out attempting to host the entire Tour behind closed doors but Riis believes Paris-Nice – a race that was held with major restrictions on crowds – offers a blueprint if needed.

“I think Paris-Nice was an excellent test for doing that,” said Riis. “We learned a lot from Paris-Nice, that it was possible to do a race like that…

“We hope there will be spectators but if they won’t allow that many spectators together they have to do it in a different way and we saw that it was possible.

“I think the most important thing is that we’re able to race.”