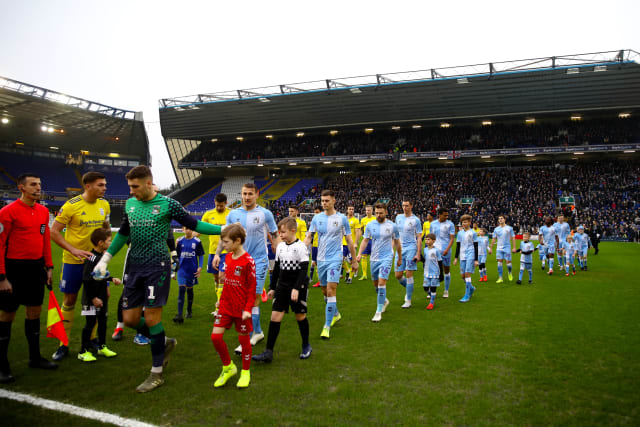 Sky Blues players unanimously agreed to take a 25 per cent wage deferral “for the foreseeable future” to help safeguard the club’s future, according to a statement on the official website.

Coventry announced early in April that all players had been furloughed but the club would supplement the Government grants to ensure they were all paid their full wages.

The players’ statement read: “By doing this we feel that we are playing our part in what is an extremely testing time for everyone. We wish to help the club overcome some short term financial difficulties that the majority of teams at this level are facing.”

Coventry sit five points clear at the top of Sky Bet League One despite playing their home matches at St Andrew’s in Birmingham amid a dispute between the club’s owners and the Ricoh Arena landlords.

“The players appreciate that circumstances surrounding this season have been testing for many Coventry City supporters, and we would like to thank them for their continued support,” the statement added.

“During these extremely difficult times we would like to relay our best intentions, through this deferral, to assist the football club to come out of this horrendous situation in a stronger, united position.”

City are still waiting to see what happens with their promotion-chasing campaign while the football authorities plan for a different future for the game while the world copes with Covid-19 risks.

Athletes who are struggling financially amid the suspension of competition will be able to apply for part of a £400,000 hardship fund launched by World Athletics and the International Athletics Foundation.

Lord Coe, who is World Athletics president and IAF chairman, will lead a panel that will assess applications and allocate money.

Coe said: “Our professional athletes rely on prize money as part of their income and we’re mindful that our competition season, on both the track and road, is being severely impacted by the pandemic.

“We are hopeful that we will be able to stage at least some competition later this year, but in the meantime we will also endeavour, through this fund and additional monies we intend to seek through the friends of our sport, to help as many athletes as possible.”

FIFA council member and medical committee chairman Michel D’Hooghe believes yellow cards should be handed out to players who spit on the field when action resumes.

The Belgian doctor acknowledged that spitting “is a common practice in football and it is not very hygienic”.

He told the Daily Telegraph: “This is one of the reasons why we have to be very careful before we start again. I am not pessimistic but I am rather sceptical at the moment.”

D’Hooghe said football administrators would need to consider punishment via a card to protect players and staff near the pitch.

Meanwhile, Australia’s National Rugby League has announced plans to resume play on May 28.

Following talks with clubs, broadcast partners and other stakeholders, Australian Rugby League Commission chair Peter V’landys said the league would return as a 20-round competition. The original schedule was for 25 rounds prior to the play-offs.

Players are due to return to training on May 4 under strict hygiene regulations, while the New Zealand Warriors will travel to Australia on Sunday before spending 14 days in quarantine.

V’landys said: “It’s safer now to play than it was in round two when we were playing. The daily infection rate in New South Wales was 25.79 per cent when the last game was played.

“It has been now less than one per cent in NSW for the last 18 days and is continuing to drop. There has also been a significant improvement in the recovery rate, being 75 per cent in NSW and 83 per cent in Australia. Our players will be safer under our protocols than they would be as regular members of the community.”