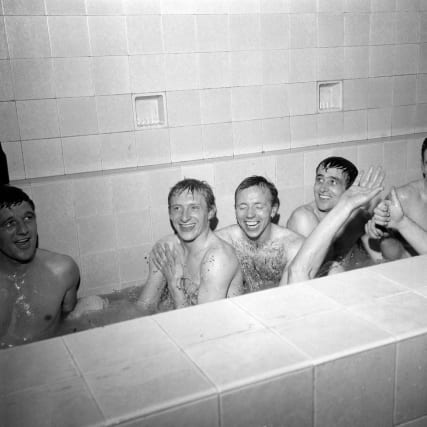 Denis Law and George Best grabbed the goals that steered Manchester United to a 3-1 win over Arsenal at Old Trafford to all but clinch the 1964-65 league title.

Matt Busby had fashioned another title-winning team, led by the ‘Holy Trinity’ of Law, Best and Bobby Charlton, and playing exciting attacking football.

Nineteen-year-old Best fired United into a seventh-minute lead, and Law made it 2-0 just before the hour.

George Eastham hauled Arsenal back into the game in the 67th-minute. His penalty was saved but he scored from the rebound to throw the Gunners a lifeline.

But Law sealed victory with his second six minutes from time and United fans invaded the pitch at the end with the title all but in the bag.

Nearest rivals Leeds, who had knocked United out of the FA Cup semi-finals, drew at Birmingham which meant that only a 17-0 final-day defeat against Aston Villa would prevent United clinching the title.

United lost 2-1 to Villa and were champions on goal average, the sixth league title of their history.