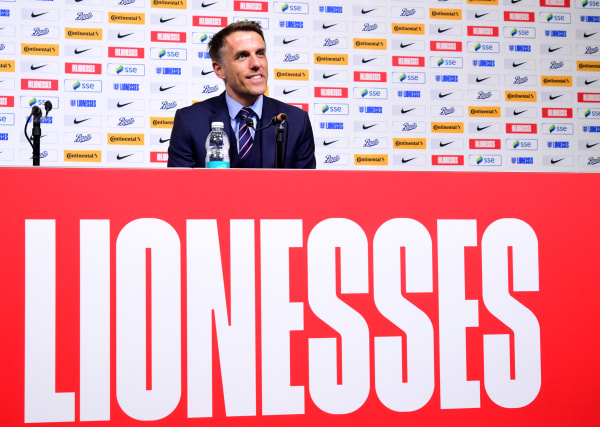 Gary Neville all but confirmed brother Phil Neville is to leave his role as England women’s manager next summer, with the European Championship’s delay to 2022 meaning the “rug’s been pulled under his feet”.

The former Manchester United and Everton defender last year led the Lionesses to SheBelieves Cup glory and fourth place at the World Cup, having succeeded Mark Sampson at the helm in January 2018.

Neville signed a deal with the Football Association until 2021, when England was due to host the European Championship – a tournament UEFA is set to confirm has been delayed until 2022 due to the coronavirus outbreak.

The 43-year-old is widely expected to leave before then at the expiration of his current contract, with an update from the FA expected to follow the UEFA Executive Committee meeting on Thursday.

Gary Neville more or less confirmed the news that his brother would leave the England post at the end of his contract, having spoken to him when reports emerged on Wednesday afternoon.

“He’s got 14 months left on his contract and obviously the Olympics and the European Championships were within that period,” he told Sky Sports.

“The problem is now obviously with coronavirus, those tournaments have been taken out of the period and international manager’s contracts run to tournament ends.

“If the tournaments have gone, then you’ve got a real problem obviously in the sense that your just coaching friendlies. I think that’s the situation that’s developed.

“I think Phil was a little bit surprised that it had come out yesterday, but it’s out and obviously in football nowadays you accept that journalists have got good contacts and people within organisations are going to speak.

“I would imagine they’re going to obviously need to make a statement in the next couple of days to sort of put some clarity around it.”

As well as leading the Lionesses, who have lost seven of their last 11 matches in all competitions, into Euro 2021, Phil Neville had been set to lead coach at this summer’s Olympic Games.

Gary Neville is not sure about the situation regarding his brother’s intended role coaching the Team GB women’s side at the rearranged 2021 Olympics, but does not believe the Lionesses manager’s focus will waver.

“I don’t know if anything decisive will be said today or the next couple of days,” the former Valencia and England men’s team coach said. “I mean usually the FA will react when a story breaks of significance to sort of put some clarity around it.

“But I think, from Phil’s point of view, he’s got 14 months left and he just thinks that he’ll be sort of coaching for the next 14 months because that’s what he’s there to do, it’s what he was always going to do.

“It’s just obviously unfortunate. You know, everyone is having to adapt with what’s happening at the moment and with tournaments being taken away that he was going to be involved in, then essentially the rug’s been pulled under his feet from what would have been his major goals as part of his career.

“Managers… I think with England, you’ll get a Worlds, you’ll get a Euros and then obviously it’ll be reflected upon after that. The Olympics was in the middle of that as well, so two of the tournaments have gone out of his portfolio that he was there to manage.”