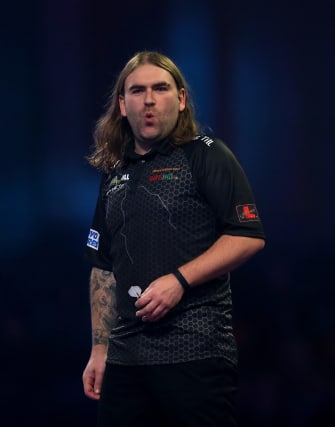 Ryan Searle was in stellar form as he usurped world number eight James Wade to win Group Six of the PDC Home Tour.

The 32-year-old sealed three wins from three on Wednesday and joined Jamie Lewis, Luke Woodhouse, Dave Chisnall, Geert Nentjes and Nick Kenny in the next round.

Wade, winner of nine PDC premier titles, was the headline act in Group Six but Searle showed his pedigree by reaching the last 16 of the 2019 World Championship and led 3-1 against Gary Anderson before falling to a 4-3 defeat in the third round in the 2020 edition.

Searle opened up with a one-sided 5-1 victory over Andy Boulton before taking on Wade in a potential group decider.

However, Searle improved as the evening went on and rattled in five maximums, averaging 100.6 to see off Wade in eight legs.

‘Heavy Metal’ was straight into his final match against Adrian Gray, with his place in the second round at stake, and eased to a 5-2 triumph courtesy of a 103.3 average.

Boulton and Wade, who both defeated Gray earlier in the evening, battled out for the second place in the final contest of the match and the former prevailed with a whitewash result.