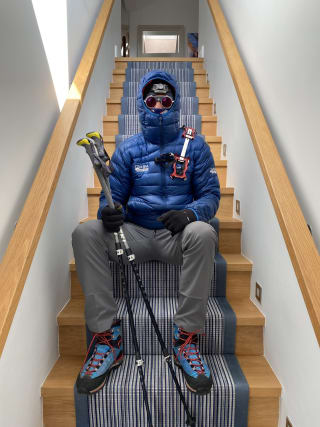 Quadriplegic ex-rugby player Ed Jackson is hauling himself up and down his staircase at home as he bids to climb the equivalent of Everest to raise money for charity during the coronavirus pandemic.

The former Bath and Wasps flanker suffered spinal cord injuries in a diving accident in 2017, and was warned he might never walk again.

But, through sheer hard work and determination, Jackson has defied that prognosis to the point that he can walk with the aid of braces and, after climbing Snowdon for charity in 2018, he set a goal of becoming the first quadriplegic to climb Everest.

That idea might be on hold for now, but the 31-year-old is doing his best to recreate it during lockdown – raising money for both the NHS and Wings for Life, the spinal cord research foundation.

“Last week I was just watching the news and obviously Captain Tom (Moore) was pretty inspiring,” Jackson told the PA news agency. “I spoke to one of my mates who’d raised some money and I thought rather than cheering on from the sofa it was time I did something myself.

“The original idea was to climb the height of Snowdon, which I would have finished yesterday lunchtime, but it morphed into doing the height of Everest over four days and camping at the bottom of the stairs.”

To reach his goal, Jackson – who can only push himself up with his right leg – must climb the stairs an incredible 2,783 times.

On his first day on Tuesday, Jackson found each effort took him about a minute – longer than he hoped – so he has had to schedule in an extra two hours a day to make this a 12-hour-a-day effort.

“It’s a journey into the unknown both physically and mentally because it’s unbelievably tedious,” said Jackson, who uses Instagram Live to connect with others twice a day, but otherwise spends huge amounts of time on his own, with only some confused dogs to keep him company.

“They’ve just been sitting at the bottom of the stairs wondering why I’m going up and down rather than taking them for a walk,” he said.

“Last night my bulldog Barry got into the tent with me but fortunately I was so tired his snoring didn’t keep me awake.”

Jackson also has his family around, although that is not always helpful.

“My step mum chucked a bucket of ice over me yesterday and shouted, ‘Avalanche!’ which was very good of her,” he said.

“I kindly reminded her I’d only done about 1500m which is the same as Kathmandu. It’s about 40 degrees in Kathmandu at the moment so there won’t be too many avalanches.

“But I have temperature regulation issues because of my injuries so it was quite nice because I’ve been pretty warm to say the least.”

Jackson suffered a fracture dislocation of his C6/C7 vertebrae in 2017. During his first week in hospital he had no sensations at all and resigned himself to a worst-case scenario.

But as some feeling slowly returned, he was able to discharge himself after three and a half months, got out of his wheelchair within nine months, climbing Snowdon within the year.

He still faces enormous challenges in his day-to-day life, remaining disabled down the left side of his body, but said in other ways what happened to him had been a “gift”.

“Your perspective shifts when something like that happens,” he said. “We’re all going through a weird time at the moment but I think it will help in the long run for a lot of us because it will give people a bit of perspective shift.

“It’s only from times like this that you grow. It’s been a hell of a journey but it’s not all been negative.”