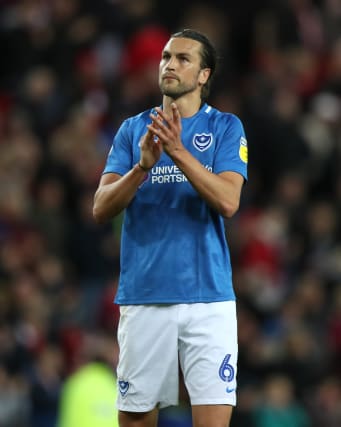 Christian Burgess is in the heart of the community rather than Portsmouth’s defence during the coronavirus lockdown, helping elderly and vulnerable people by handing out prescriptions, preparing meals and checking smoke alarms.

The Covid-19 crisis continues to have a widespread impact on the lives of everyone in the UK, with people ordered to stay home in a bid to curb a pandemic that shows few signs of abating.

Football, like all gatherings, has been suspended during this unprecedented period and it is unclear when it can restart, and to what backdrop.

It is a time of great uncertainty for players and clubs, particularly lower down the pyramid, but towering Pompey defender Burgess is keeping perspective through community work.

“You’re meeting people who, if we’re honest, are scared and anxious to leave their house because at the end of the day lives are on the line here,” he told the PA news agency. “It’s terrible, having a devastating impact.

“You go from that to talking about the season not being finished or contract situations being uncertain. It’s just farcical, you know? It’s just complete opposite ends of the spectrum.

“It brings it home how lucky we are as footballers, but also how serious it is in the real world at the moment.

“That’s why I’m obviously so keen to try and put any of the time that I now have free to good use.”

Burgess is deeply involved with the local community at a club where he has established himself as a fan favourite over the last five years.

Made aware of the volunteering being done out of the Heart of Hayling Boxing Academy, the 28-year-old quickly joined the team working alongside Hayling Helpers in delivering medicine to elderly and vulnerable people in the area.

They have also been checking whether smoke alarms are working on their rounds for Hampshire Fire and Rescue, while Burgess is also working with Pompey in the Community during the pandemic.

“It’s probably a few days a week,” the defender said of his volunteering.

“I did look at Portsmouth to try and see what was there and it’s all started now, really, so a couple of the boys are helping out as well as myself to deliver food from Pompey in the Community’s hub across Portsmouth.

“I pop over to Hayling two or three times a week to do the same with the prescriptions.

“It’s just sort of mixing my time. We’re not at work, so there’s plenty of free time.

“I’m just trying to keep fit on the side, go for runs and cycles and stuff, and other than that, I’ve got a lot of free time on my hands.”

Burgess, who has yet to be furloughed despite the club announcing their intention to do so on March 31, has found it fairly easy to maintain fitness during the lockdown, saying a couple of weeks should be enough to get match fit before resuming games.

The Pompey centre-back is among those facing the added complication of being out of contract in the summer, but he sees the bigger picture at a time when clubs in League One and League Two are feeling the bite.

“Ticket revenue is massive for a lot of clubs and we’re lucky at Portsmouth with the backing we have from our owners and the profit we made recently is fantastic for us,” Burgess said.

“But some of the other clubs, perhaps the smaller clubs, aren’t in that same position, so are really going to struggle.

“It’s going to be tremendously sad if we lose football clubs throughout the period.”

But Burgess is not focusing so much on football right now as he looks to do his bit during the crisis.

“It’s so rewarding as well, personally, you know? It’s brilliant to think that you’re helping out,” he said. “I’ve met a lot of fantastic people.

“The Hayling Helpers are just a brilliant bunch and I met some fantastic women the other morning in the kitchen (with Pompey in the Community), who were volunteering, giving up their time, just going there from nine until two just cooking.

“I think we did 100 meals – I say we, they did most of it, I just helped prepare a bit of the vegetables, so I don’t want to take credit.

“They’re amazing, they’re doing that every day, Monday to Friday.

“There are just brilliant people out there and that’s one of the great things.

“If you get involved, you meet all these people and you do a bit of good as well.”