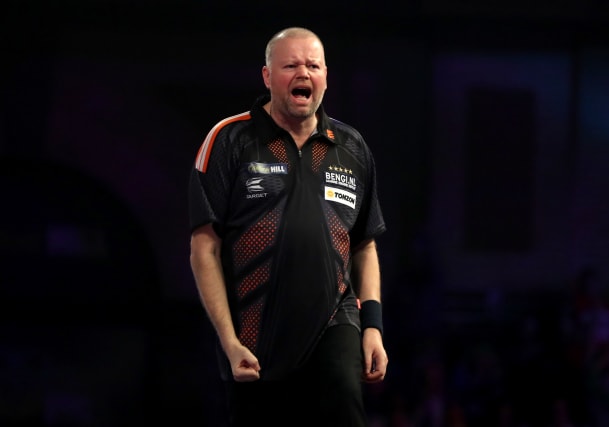 Born in The Hague on April 20, 1967, Raymond Van Barneveld can rightly lay claim to being one of the greatest darts players of all time.

Here, the PA news agency takes a closer look at his glittering career.

Van Barneveld’s languid style made him essential viewing at his very best, helping him to the five world titles and countless other major championships that adorn his record.

Unstoppable at the Lakeside

Four of his world crowns came in the BDO at the Lakeside. He first lifted the title in 1998 against Richie Burnett, defending it the following year against Ronnie Baxter. He regained the championship in 2003 with victory over Ritchie Davies.

Victory over Adams was emphatic

Van Barneveld’s final Lakeside success came over Martin Adams in 2005, who would himself go on to prove himself one of the best to have graced the Frimley Green stage.

When Van Barneveld left the BDO for the PDC it signalled the beginning of one of the most famous rivalries in sport, as the Dutch master came up against Phil ‘The Power’ Taylor.

His Circus Tavern final with Taylor in 2007 is arguably the most memorable game of darts ever televised. It is almost certainly the most dramatic, with Van Barneveld roaring back from three sets down to win in a deciding leg, taking out double top for victory.

Taylor generally had his measure after that, but there is little doubt their meetings were box office events for a long time.

Incredibly popular with the darting audiences that packed the big arenas for tournaments like the Premier League, his walk on to the sounds of Survivor’s ‘Eye Of The Tiger’ was perfectly suited to the modern game and the ‘Barney Army’ lapped it up.

Bowing out at Ally Pally

Van Barneveld was always heavily critical of his own game and found the gruelling demands of the increasingly busy professional circuit took its toll.

He announced 2019 would be his last full season and it was a sad sight to see him exiting the 2020 World Championship at Alexandra Palace at the first hurdle.

The man who inspired MVG

But the later years of his career will never be able to diminish his achievements – and he can also take pride in being the man that inspired another wonderful Dutch arrowsmith, Michael Van Gerwen.