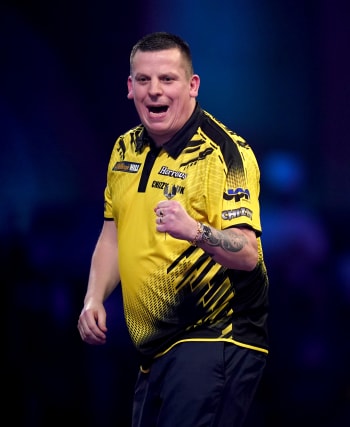 Dave Chisnall reached the next round of the PDC Home Tour after winning Group Three.

The 2019 World Championship quarter-finalist clinched the group after a final game 5-1 win over Jonathan Worsley on Sunday night.

It completed three wins from three for the 39-year-old.

“I played alright in the first two games, the last one was one of those. I just had to win two legs and get through,” he said.

“You can’t think about how high you are in the group, you’ve just got to go and win.”

Chisnall went 1-0 down in the first leg but recovered to move 3-1 ahead, before sealing the final two to become the first of the higher ranked players to win.

Worsley added: “I struggled but Dave is a top guy and I’m glad he got through. I hope he goes on to win it now.”

On Sunday, Chisnall won his opening match against Scott Waites, playing on his landing at home in Halifax, 5-2 on day three of the competition.

Next, Jan Dekker’s recovery was not enough to beat Worsley. Dekker was 4-1 down but recovered to make  it 4-4 only for Worsley to take the final leg to win 5-4.

But Worsley suffered defeat in his next match when he slumped to a 5-1 loss to Waites.

Dekker returned to play Chisnall but fell apart and could not mount a comeback as he was whitewashed 5-0 and then suffered another defeat to Waites, losing 5-1 to fail to win a match.

“I wanted to play and watch the scores. It’s so hard to be on your own, I want to focus on my game but it’s really hard,” said Dekker. “You want to try so hard.”