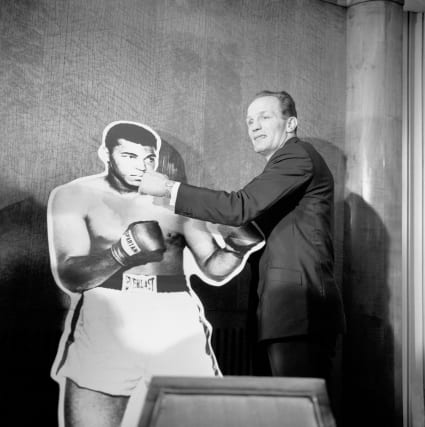 The pair first met at Wembley on June 18 1963 in front of a 35,000 crowd, when Ali, then 21 and only three years into his professional career, was still known as Cassius Clay.

Cooper became only the second fighter to put Ali down when he caught with a left hook just before the end of round four that became known as ‘Enery’s hammer’. The ropes cushioned Clay’s fall and the bell bought him time to recover.

The referee stopped the fight in the fifth round with Cooper bleeding profusely from a cut above his left eye. Clay had bad-mouthed Cooper in the build-up to the fight but he admitted he had underestimated him afterwards.

A re-match always seemed likely and on April 19, 1966, Cooper signed a contract for a second fight on May 21. By now Clay had changed his name to Muhammad Ali and had become world heavyweight champion. The second bout took place at Arsenal’s Highbury stadium in front of a crowd of 46,000.

Ali had learned from the first fight and gave Cooper no chance to work inside when the pair came together, gripping his opponent tightly and pushing him away when the referee called break.

The outcome was the same as the first meeting with Cooper stopped by the referee due to a cut above the eye, this time in the sixth round.