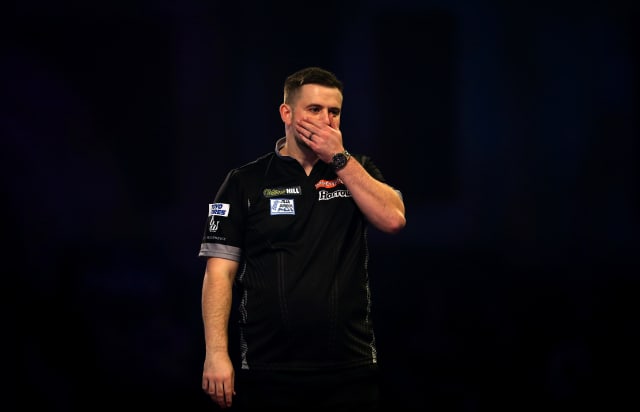 The newly-devised tournament, in which players take part in their own homes and stream the video for fans on the PDC website during the coronavirus lockdown, saw history made as Woodhouse took out 177-177-149 from his own kitchen to move 4-0 ahead against Price.

Woodhouse, ranked 54 places below Price in the PDC rankings, averaged an incredible 113.9 against the Welshman in a 5-0 rout and topped the round-robin standings thanks to 5-2 wins over fellow Englishman Ted Evetts and Austria’s Rowby-John Rodriguez.

“It’s been unbelievable, probably about 300 per cent more than I was expecting, to be honest,” Woodhouse said.

“I haven’t really been putting in the hours on the board so to come and play a decent game is very nice.”

There were none of the technical glitches that bedevilled the opening night, where world champion Peter Wright surprisingly finished second in his group to Jamie Lewis.

There was also an upset on Saturday night although there was little Price, playing in his kitchen in what he admitted was a hastily arranged set-up, could do against Woodhouse.

Either side of those losses, Price did record 5-2 wins over Evetts and Rodriguez, who was back home in Vienna and said he had been given special dispensation by his neighbours to play beyond 8pm.

Price said after his runner-up finish: “It’s been good. Obviously I wanted to win the group and still be in the tournament but it’s a bit of fun, I tried 100 per cent and it just wasn’t meant to be.

“Luke played fantastic, he always plays his best game against me! Fair play, he played brilliant, I wish him all the best and I wish everybody all the best that’s left in.”

Evetts condemned Rodriguez to bottom place in the table with a 5-3 win but the night unquestionably belonged to Woodhouse, who believes he is capable of challenging the likes of Price, Wright and world number one Michael van Gerwen on a regular basis.

He said: “I know my A-game is with anyone in the world, it really is. You’ve only got to ask people that practice with me or have known me for a long time that I can put in those sorts of numbers quite a lot.

“The main thing is consistency on the tour and finding a way to sometimes get through games that don’t go your way and not throw games away.”