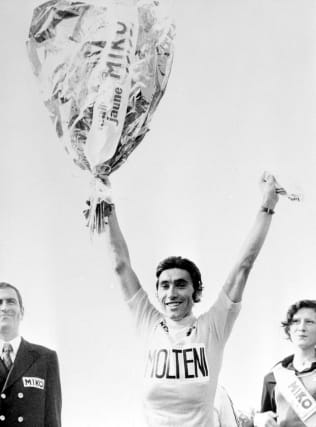 The Tour de France – originally scheduled to run from June 27 to July 19 – will now start on August 29 due to the coronavirus pandemic.

Here, the PA news agency takes a look through the history books to profile 10 of the greatest riders from the race’s history.

Widely considered the greatest ever cyclist, ‘the Cannibal’ won the Tour in each of the first five editions he entered, four in a row between 1969 and 1972, then again in 1974 after he skipped the 1973 race to win the Giro-Vuelta double instead. Merckx’s insatiable desire for victory saw him win a record 34 stages of the Tour in his career. He completed the Giro-Tour double three times, and in 1974 became the first man to win cycling’s ‘triple crown’ of the Giro, Tour and World Championships road race, an achievement matched only once since by Stephen Roche in 1987. Merckx’s hopes of a sixth title in 1975 were ruined when he was punched by a spectator on the Puy-de-Dome during stage 14, battling on to finish second overall despite suffering from an inflamed liver as a result of the incident. He would never again win another stage of the race he had dominated for so long, with his only other appearance in 1977 ending in a sixth-placed finish.

The last Frenchman to celebrate victory in the Tour de France, Bernard Hinault took the title in 1978, 1979, 1981, 1982 and 1985. A sixth title eluded ‘the Badger’ – a knee injury forced Hinault to withdraw in 1980 while in the yellow jersey, with a similar problem preventing him from starting in 1983. But most fascinating of all was the 1986 race, in which Hinault had pledged to help La Vie Claire team-mate Greg LeMond. If he did help, he did so grudgingly, happy to play up to the idea he was capable of winning a sixth title. An attack on stage 12 to Pau put him more than five minutes clear of LeMond and he held yellow for five days, losing it after stage 17. The pair finished arm-in-arm on Alpe d’Huez at the end of stage 18 but the gesture seemed an empty one given Hinault’s interview immediately afterwards claiming the race was still on. LeMond eventually triumphed by three minutes but the distrust lingered, and Hinault retired at the end of the season, still only 32.

Of the four men to have won five Tour titles, only Spaniard Indurain achieved it with five consecutive victories as he seized control of the race from 1991 to 1995. It was a record perhaps in keeping with a rider many criticised as “robotic” as he ripped up time trials to stamp his authority on the race. Indurain’s success came in the second half of his career – he had competed in the Tour and Vuelta a combined 10 times, never cracking the top 15 until he finished 10th in the 1990 Tour and seventh in that year’s Vuelta, teeing up the success that began a year later. He also claimed two Giro titles, in 1992 and 1993, but never bettered his second place from 1991 in his home Grand Tour.

Anquetil was the first man to win the Tour five times, taking victory in 1957, 1961, 1962, 1963 and 1964, with a Tour-Vuelta double in 1963 and a Giro-Tour double in 1964. After emerging as a strong amateur, Anquetil broke the prestigious Hour Record while on national service in the French army, teeing up the professional career that would soon follow. Riding in a very different era, Anquetil never denied doping, saying during a television debate: “Leave me in peace; everybody takes dope”. Anquetil died in 1987 from stomach cancer, aged 53.

Froome’s awkward-looking style on a bike might frequently be mocked, but none can now question the success it has brought him with seven Grand Tour trophies in the cabinet. His Tour successes in 2013, 2015, 2016 and 2017 have been complimented by his stunning 2018 Giro victory and Vuelta titles from 2011 and 2017 – the 2011 title having only been awarded last year after Juan Jose Cobo was found guilty of doping, retroactively making Froome Britain’s first Grand Tour winner. Many believe Froome was strong enough to have beaten Sir Bradley Wiggins in the 2012 Tour but for team orders, and it remains to be seen if his chance at a record-equalling fifth title is now gone after a high-speed crash during last year’s Criterium du Dauphine left him with a long list of injuries which may prevent him from ever getting back to his best again.

LeMond’s victory in 1986 went down in history as one of the most fascinating ever Tours given the intra-team battle with Hinault, but for the American it was only the beginning as he followed up with an even more dramatic win in 1989. After suffering life-threatening injuries in a 1987 hunting accident, LeMond’s future in the sport was in question – he was not considered a contender in 1989 and had told his wife he was thinking about retirement. But he bossed the stage-five time trial and battled tooth and nail with Laurent Fignon through the mountains. As they began a rare time trial into Paris on the final stage, LeMond began some 50 seconds behind Fignon but stunned the Frenchman to win the Tour by just eight seconds, going on to take the world title a month later. LeMond would claim a third Tour title in 1990.

Regarded as the first great rider of the post-war era, Bobet was the first to win the Tour in three consecutive years as he dominated from 1953 to 1955. Having taken up cycling after serving in the army during World War II, Bobet’s introduction to the Tour was an inauspicious one as his 1947 debut ended in an early withdrawal and earned him the nickname ‘cry-baby’ as he wept at the difficulty of the race. But he returned a year later to spend two days in yellow and finished third in 1950 to point to far greater potential. He won the 1955 Tour despite saddle boils which required surgery and which Bobet said made him a lesser rider for the rest of his days. After missing the 1956 and 1957 Tours, he returned in 1958, finishing seventh, but was no longer able to compete for yellow.

‘The Basset Hound’ was the first three-time winner of the Tour and a man who would no doubt have contended for or won many more but for the First World War. The Belgian’s first win came in 1913 despite him suffering a broken fork and incurring a 10-minute penalty when he stopped at a bike shop for repairs. He won again in 1914 but, with the intervention of war, had to wait until 1920 for his third. Tour organiser Henri Desgrange wrote: “France is not unaware that, without the war, the crack rider from Anderlecht would be celebrating not his third Tour, but his fifth or sixth.”

Raymond Poulidor never won the Tour de France but he rode his way into its legend during his long rivalry with Jacques Anquetil. ‘Pou-Pou’ became known as the ‘Eternal Second’ as he finished second three times and third five times, riding on to the age of 40 in his hunt for the yellow jersey – a garment that would always elude him. Poulidor came closest in 1964, losing by only 55 seconds to Anquetil after the two men rode themselves to exhaustion on the Puy de Dome. But with every failure, Poulidor’s popularity with the French crowds only grew, even as he was competing with a compatriot, and by the time of his death last year he was arguably France’s most popular ever rider.

Mark Cavendish sits in a category of his own in the history of the Tour as its greatest ever sprinter. Though effectively competing in a different event to those seeking to wear the yellow jersey in Paris, Cavendish became synonymous with Tour success as he utterly dominated the flat stages at his peak. Between 2008 and 2011 he won an incredible 20 stages and in total the Manxman has piled up 30 victories – second only to the record of Merckx – before illness and injury slowed him and left a question mark where there had once appeared near certainty he would one day take the record for himself.