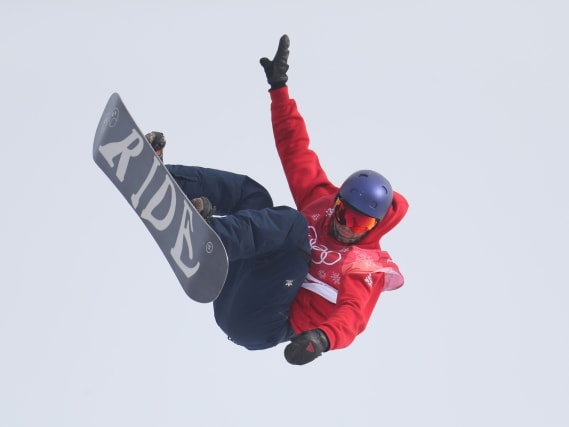 Spending the coronavirus lockdown tending radishes and fixing water-butts has offered a glimpse of a more sedentary future for Olympic snowboarding bronze medallist Billy Morgan, who has called time on his competitive career.

The 31-year-old thrill-seeker, who became Great Britain’s first male medallist on snow in the Big Air in Pyeongchang two years ago, admits his regular all-action lifestyle has been wrecked by the enforced isolation measures.

In addition to brushing up on his gardening and DIY skills, Morgan has been taking his time to consider his ongoing relationship with the sport, having initially taken a year out in the immediate aftermath of his Olympic success.

“The competition thing is over for me now,” Morgan told the PA news agency, in between watering his impressive range of seed-beds.

“I hit a wall with being able to compete at a high level and I needed a change of scene. I will still be doing the fun contests but I will not be going to the next Olympics.”

Morgan is well-known for some notorious apres-ski antics – he celebrated his Olympic debut in Sochi in 2014 by dancing with a toilet seat around his neck, and was wheeled back into the Pyeongchang athletes’ village in a shopping trolley.

Having shrugged off a career-threatening injury, he cashed in on his improbable Olympic success by diversifying into a range of film and content, revolving around travel-blogging and extreme sports experiences.

But after returning from a trip to the Himalayas in January, Morgan now finds himself confined to a strictly-controlled environment along with his girlfriend Sammy-Jo, who is expecting their first child in August.

“I’m on full-on lockdown,” added Morgan. “I go out for a bike ride in the morning when nobody else is about. I feel safe doing that but the rest of the time I’m indoors.

“I’m really missing being able to call my mate up and go for a skate or go climbing. It’s taking quite a toll on me, but I’ve turned to things like gardening and cooking to find my state of Zen.

“I’ve been gardening loads. Usually I can’t maintain it because I’m away, but this year my garden’s all ship-shape. My seed trays are at the early stages but my radishes are almost ready.

“I’ve been decorating my house a lot too, and I’ve finished a loft conversion. I feel like I’m a retired old man, pottering around. I do look at myself and think, this is what I’m going to be like one day.”

Morgan said his father, whom he dubbed ‘Mad Eddie’ in the wake of his Olympic triumph after regaling a story which involved him injuring himself with a home-made booby-trap he had set for burglars, is continuing to recover from a serious stroke he suffered two years ago.

“He’s going out of his mind with boredom, but his wild days are over,” said Morgan. “My grandmother lives two houses down from me, so I’m able to have chats with her through a hole in the fence, across the neighbour’s garden.”

Morgan’s brief but high-profile stint in the spotlight helped raise the profile of his sport and its domestic governing body, GB Snowsport, and for Morgan that will endure as his most precious legacy.

He maintains that while he will not miss the level of commitment required to transform his skills from social media into Olympic success, he will pursue the next chapter in his snowboarding career better-off for having achieved his popular bronze medal.

“I was stressed a lot in the 18-month build-up to the Olympics – the adrenaline is what drives you to do our sport, and I found I lost that when I was chasing points to qualify for things,” Morgan added.

“I had made it a job rather than my passion, so my aim after the Olympics was to go away and rediscover that passion.

“I’m really lucky in that I don’t regret anything. I have got more than I ever wanted out of the sport.

“I never thought I’d go and get an Olympic medal, but I did all the right things to go out and do that, and it was a mega-bonus.”