Deontay Wilder had bicep surgery after loss to Tyson Fury 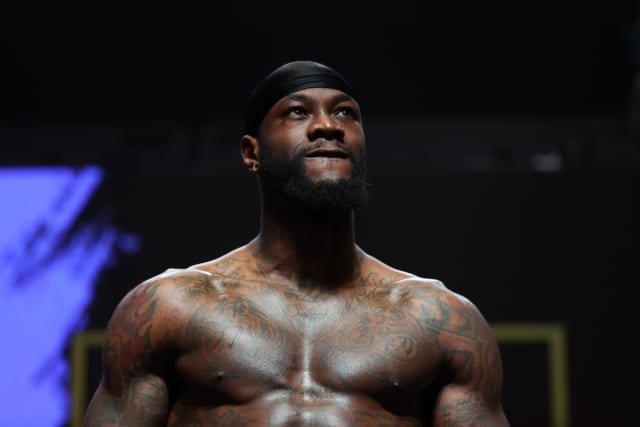 Deontay Wilder revealed he has undergone surgery to repair his left bicep after suffering an injury during his WBC heavyweight title defeat to Tyson Fury earlier this year.

Wilder suffered the first loss of his 44-fight professional career after a dominant display from Fury, who knocked the powerful American down twice en route to a seventh-round stoppage in Las Vegas in February.

A third fight against the unbeaten Briton is firmly on Wilder’s radar but the 34-year-old is first concentrating on getting back to full fitness.

“Recovery is going well, I’m in therapy,” he told the PBC podcast. “I ended up injuring (my arm) during my last fight somewhere up in there. But everything’s going great with it.

“Once I get healed with my arm, I’m just looking forward to working out and been able to do the things I love to do.”

Wilder and Fury battled to a hotly-disputed draw in December 2018 but there was no disputing the result of their latest contest.

Wilder initially blamed his lethargic performance on the 40lb weight of his elaborate ring walk costume and two months on, he hinted there were other factors at play.

“There’s a lot of things that I don’t even want to talk about at this moment in time,” he said.

“Maybe I’ll come out with some things later on as things unfold when I get into camp but I don’t want to talk about it at the moment in time. I’m still reflecting on it and figuring some things out.

“People that know boxing know that that wasn’t Deontay Wilder, I was a zombie that night.”

The initial plan was to have Wilder’s third contest against Fury on July 18 but the coronavirus pandemic means the date will likely be pushed back towards the back end of the year.

“We only get stronger, I’ll learn from this situation and get better,” Wilder added.

“I’m just focusing on recovering, getting myself back to full health and getting ready to hopefully get this corona stuff out the way so we can get back to camp and get ready to go again sometime at the end of the year.

“In my eyes I don’t see Fury as a champion, we’ve still got one more fight left. I’m looking forward to giving the world the best of Deontay Wilder. I’m not done yet.”