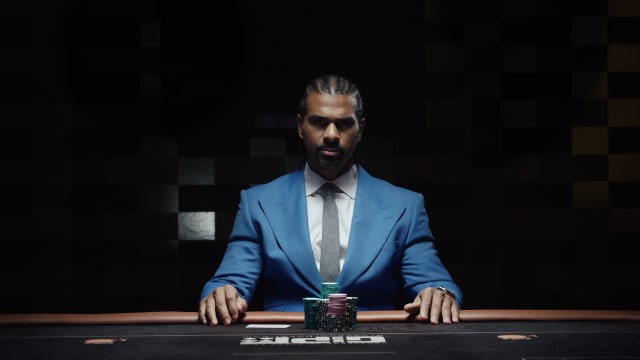 When David Haye agreed to swap the boxing gym for a poker table and challenge the world’s best, the former heavyweight and cruiserweight world champion admits he did not know what he was letting himself in for.

Haye’s attempt to mix it with the big guns at the biggest live poker tournament outside Las Vegas, Grosvenor Casinos Goliath 2019, is the subject of the new documentary David vs Goliath, released on Amazon Prime this Friday.

“They said to me, if they gave me a year of training with the best poker players in the world, the best coaches in the world, how well do I believe I could do?” Haye told the PA news agency.

“With my confidence in my own abilities, I thought I’d win it easily. Genuinely. I thought if I was doing it for a year, figuring it all out, understanding it, as long as I’ve got the best teachers I’d win it.

“But it soon became apparent poker is not something you can pick up in five minutes.”

Having never played the game, Haye did not know a big blind from a cold call before he started.

Haye began with some intensive classes with pro players Katie Swift, Joe Beevers and Jeff Kimber, but he struggled with the barrage of information and failed to apply their advice as his early outings usually ended swiftly.

“I felt like I was back at school,” Haye said. “I’m a very visual person. I learn things on the fly. I learn from making mistakes. I can’t be sat down in a classroom and walked through it. Nothing sinks in. I just need to get out there and play.”

Enter Audley Harrison. Haye’s old nemesis in the ring became his tutor out of it as the pair jetted off to a luxury resort and took a very different approach – playing the game night and day to give Haye a hands-on education.

“We didn’t think about anything but poker,” Haye said. “We lived and breathed it for 48 hours. From the moment I woke up every day I thought about poker. When I went to sleep I dreamt about poker.”

Haye travelled straight to the Asia Poker Tour event in Manila where he finished 28th out of 500, describing the experience as being up there with his biggest successes in the ring.

Haye then arrived in Coventry to take on Goliath in August, where he would ultimately finish 40th.

“It was the toss of a coin but the more you play, the more the chances that coin will land on your side,” Haye said.

“To have achieved as much as I did makes me think the way I learned was definitely right for me.”

Haye, 39, has left the experience as a keen poker player, but is still heavily involved in boxing as manager of Dereck Chisora.

Chisora is seeking a new date for his world title eliminator against Oleksandr Usyk and could take the fight to Saudi Arabia.

“He’s training every day so he can be ready as soon as we get the official date,” Haye said. “He’ll be the best Derek Chisora he can be and I believe that will be enough to beat Usyk.

“(The lockdown) is not ideal at all given he’s 36. You don’t need an unnecessary six-month gap but it’s not like he’s coming back from an injury. He’s been able to build on his condition.

“Usyk is number one when it comes to skillset but Derek is a wrecking ball and he can supersede that skillset because he won’t play the skill game, he’ll drag Usyk into a dogfight and really upset the apple cart.”