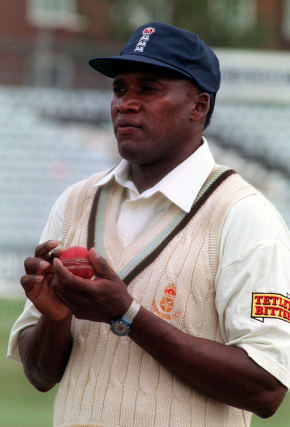 Former England fast bowler Devon Malcolm revealed his dismay at being unable to visit his father, who died in hospital aged 75 earlier this month.

Malcolm’s father Albert lived in a care home but was admitted to hospital on March 29 with a bladder infection before testing positive for the coronavirus four days later.

He died on April 4, and Malcolm told BBC Radio 5 Live: “It’s so difficult when a loved one is admitted to hospital and you are told you can’t visit, you can’t be there for them.

“Later on when I got the call to say he had passed, it was a very, very weird feeling.

“Until you get the death certificate and the reality sinks in, it feels like you’re having a dream and you’ll be out of it in a minute. I’m trying to come to terms with it but it’s going to be really difficult.”

Malcolm, who took 128 wickets for England in 40 Tests between 1989 and 1997, added: “We have a date for the funeral but the process is so different now to going through a bereavement in the past.

“There are only five people plus the vicar allowed at the graveside. We’re hoping in the future when we get back to some normality, we can possibly do a proper service, celebrating his life with all his grandkids and his friends.”