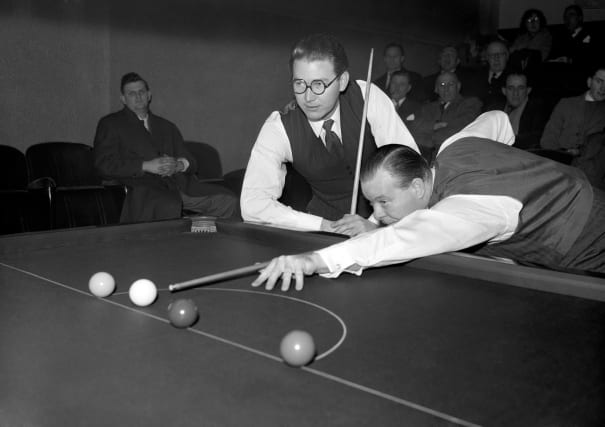 Joe Davis, the most dominant player in the history of snooker, was born on this day in 1901 in Whitwell, Derbyshire.

Davis won the first 15 consecutive world championships from 1927 to 1946, at which point he retired undefeated to focus on playing exhibition matches.

Recognised as the ‘founding father’ of the game by most seasoned observers, Davis, who died in 1978 aged 77, firmly deserves his status alongside five more of the greatest players to pick up a cue.

Twelve years younger than his illustrious sibling, Fred Davis nevertheless also established himself as one of snooker’s top players, winning eight world titles between 1948 and 1956. Davis continued playing into his later years, reaching the world semi-finals in 1978 at the age of 64, and the quarter-finals the following year with a victory over Kirk Stevens. He died in 1998 at the age of 84.

With only two world titles to his name, Alex Higgins cannot compare with his fellow snooker greats in terms of pure silverware. But where Higgins eclipses all of his contemporaries is in an outrageous and swashbuckling natural talent which saw him hurl snooker out of its smoke-filled history and into the brash modern age. Higgins’ 69 break against Jimmy White in their 1982 World Championship semi-final is commonly regarded as the best the sport has seen.

Nerveless and supposedly uninteresting, Steve Davis dominated the game in the 1980s, winning the world title six times and exuding such a natural calm it was felt he had beaten most opponents before he even stepped up to the baize. Nevertheless for all his superiority, Davis is destined to be remembered for his famous missed black in the deciding frame of the 1985 world final against Dennis Taylor.

It was not felt anyone could dominate the sport quite like Davis, but up stepped Hendry to eclipse his illustrious predecessor, winning seven world titles in nine years in the 1990s. Hendry’s first world championship came at the age of 21 and propelled him into a lucrative career which also saw him clinch five UK titles and six Masters – five of which he won consecutively. Hendry scored a maximum on his final appearance at the Crucible in 2012.

Despite being a five-time world champion, the feeling is O’Sullivan could have won many more. It is all the more remarkable that in a career marked by sporadic absences and well-documented battles with loss of form and mental health, he has established a record 19 ‘triple crown’ victories, and shows few signs of slowing down as he edges deeper into his fifth decade.