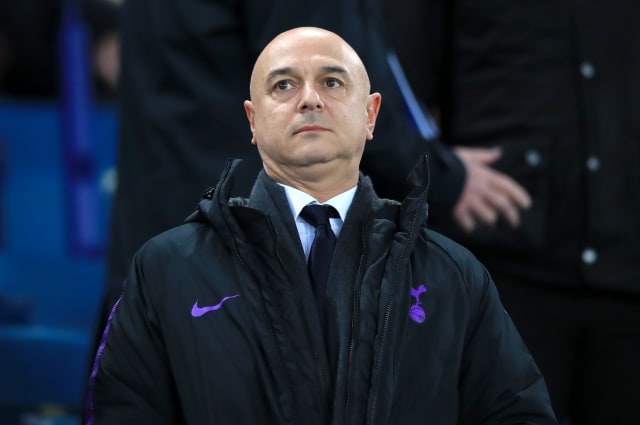 Tottenham have reversed their controversial decision to utilise the Government's coronavirus job retention scheme and promised to pay all non-playing staff their wages in full.

Spurs chairman Daniel Levy acknowledged "criticism" that has been fierce and widespread since they announced plans at the end of March as to how they would cope with the Covid-19 fallout.

The north London club outlined their intention to reduce the wages of all 550 non-playing directors and employees for April and May by 20 per cent, utilising, where appropriate, the Government's furlough scheme.

Tottenham's decision led to a ferocious backlash which has brought about a belated U-turn from last season's Champions League finalists.

A statement from Spurs read: "In our last update we said we would keep our position under review, especially in the context of revised budgets and cost cutting.

"Having done so we have decided that all non-playing staff, whether full-time, casual or furloughed, will receive 100 per cent of their pay for April and May. Only the board will take salary reductions.

"With no clarity on when football might resume and under what conditions, we shall continue to keep this under ongoing review. We should like to thank our staff for their incredible support and understanding.

"We are acutely aware that many supporters were against the decision we made regarding furloughing staff who could not carry out their jobs from home – due to the nature of their work – and our intention to apply, if applicable, for the coronavirus job retention scheme (CJRS), a scheme designed to ensure that jobs and employment rights are protected.

"Indeed we have seen opposition from fans to fellow Premier League clubs accessing the CJRS too. This once again underlines that we bear different pressures to other businesses, many of whom have and will continue to apply for support from the scheme as the Government intended.

"In view of supporter sentiment regarding the scheme, it is now not our intention to make use of the current CJRS that runs until the end of May.

"We shall consult with stakeholders, including the Tottenham Hotspur Supporters' Trust with whom we have been in dialogue over the past week and who share our desire to protect jobs, should circumstances change going forward."

Norwich, Newcastle and Bournemouth continue with their plans to utilise the Government's job retention scheme.

Sheffield United announced over the weekend they "will assess whether or not to participate in the JRS" at a later date after furloughing some staff, while runaway Premier League leaders Liverpool changed their decision to furlough staff due to a furious backlash.

Spurs felt similar heat, with the Tottenham Hotspur Supporters' Trust publicly railing against the move, and chairman Levy has held his hands up.

"The criticism the club has received over the last week has been felt all the more keenly because of our track record of good works and our huge sense of responsibility to care for those that rely on us, particularly locally," he said.

"It was never our intent, as custodians, to do anything other than put measures in place to protect jobs whilst the club sought to continue to operate in a self-sufficient manner during uncertain times.

"We regret any concern caused during an anxious time and hope the work our supporters will see us doing in the coming weeks, as our stadium takes on a whole new purpose, will make them proud of their club."

We have been saying consistently @SpursOfficial - pause and rethink. We are now saying it clearly and in public - do not further damage the Club's reputation, listen to your fans.

There has yet to be any update on Spurs' talks with players and coaching staff about potential pay cuts.

Away from the subject of finance, the club announced equipment has now been installed at the Tottenham Hotspur Stadium so it can "operate drive-through Covid-19 testing and swabbing for NHS staff, families and their dependents".

In addition to being the first Premier League ground used for testing, the stadium has been "repurposed and fitted out to house the North Middlesex Hospital's Women's Outpatient Services".

The move frees up capacity at the hospital itself to treat patients with coronavirus symptoms, while "supporting the redirection of pregnant women away from the hospital during the pandemic".