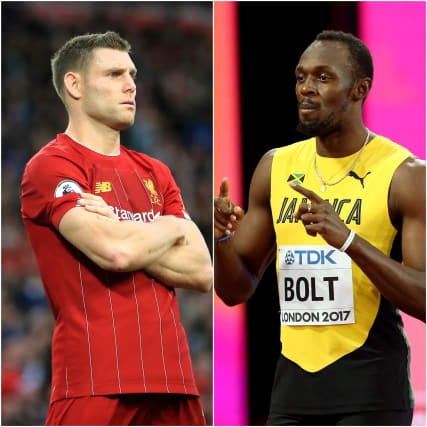 Here, the PA news agency looks at some of the best examples from April 13.

AC Milan striker Zlatan Ibrahimovic turned up for a training session at Hammarby – the Swedish club where he is part-owner.

Liverpool midfielder James Milner has plenty of chores to do, one of which appeared to be pretty boring…

Usain Bolt took to Twitter to offer a cheeky reminder of social distancing guidelines, posting a picture of himself crossing the line at the Olympics a long way clear of his 100m competitors.

Kevin Pietersen released an impassioned plea to his fans to contribute to the prime minister of Pakistan’s ‘Covid Relief Fund’.

Tyson Fury and his wife Paris teed up their first live workout, which will take place on Tuesday morning. Fury announced his brother Tommy and his partner Molly-Mae Hague – who were runners-up on Love Island last summer – would be taking part.

And Derek Chisora found himself some new sparring partners.

Spanish cycling team Movistar have launched a competition asking their fans to design a new jersey which the squad will wear whenever racing resumes, with proceeds from the project to be used to support those affected by the outbreak.

Movistar – who have young British rider Gabriel Cullaigh on their roster – said signed jerseys in the winning design would be delivered to the Spanish Red Cross and Italy’s Protezione Civile (Civil Protection).

Open champion Shane Lowry believes the coronavirus pandemic has provided him with a fresh perspective on life.

He tweeted: “I’ll never take anything for granted again, 9 holes with the lads, dinner with Wendy in our favourite restaurant, a pint in my favourite pubs with friends. Going for lunch and talking garbage all day with loads of coffee. All of my favourite things and can’t do any. Strange times.”

Red Bull driver Max Verstappen took to Twitter to reveal he will be taking part in a virtual race against the best Supercars drivers in the world on Wednesday, in the second round of the BP Supercars All Stars Eseries.