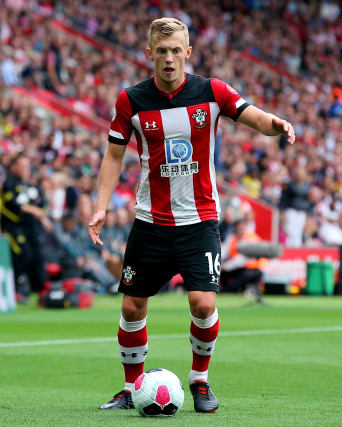 James Ward-Prowse is champing at the bit to resume Southampton’s Premier League campaign – but the England international knows football is “totally irrelevant” at a time when NHS workers are fighting the coronavirus.

It is five weeks since Ralph Hasenhuttl’s side last took to the field, with the sporting landscape brought to a shuddering halt as the world attempts to get a grip on the Covid-19 pandemic.

The Premier League is indefinitely suspended until play is safe to resume, meaning there are many more weeks – and perhaps even months – before the final quarter of the season can be played.

Ward-Prowse is as desperate as anyone to get back to action, but it is hard to focus on the football side of things when there are far more serious matters dominating everyday life.

“Football seems totally irrelevant when you put into perspective what they’re going through at the minute,” the Saints midfielder said of the work being done by the NHS.

“I don’t know in my friends and family anyone who does work there, but having seen the news, and seeing the odd bit here and there, you can see the pressure that they’re under and the challenges they’re facing.

“As individuals in football, you can go into the weekend thinking we’re annoyed about maybe not playing or losing a game, or a refereeing decision not going our way.

“But that all seems very, very minor now compared to things that the NHS workers are going through.

“I think as a collective within football, but also in general, everyone can take a lot of inspiration from the way that the NHS is performing. I think it’s incredibly humbling to see.”

Ward-Prowse is proud to be a part of the new #PlayersTogether initiative, which has seen Premier League footballers partner with NHS Charities Together to get funds where they are most needed.

The midfielder is also part of the first top-flight dressing room to agree a wage deferral with their club, ensuring that Southampton’s non-playing staff retain their jobs and full wages during this crisis.

“(It was) very easy (to sort out),” Ward-Prowse told the PA news agency, with West Ham the only other Premier League club to have so far reached a similar agreement.

“The club is a very family-orientated club. Ever since a young boy coming into the club, they always treated me like a family member.

“Growing up as well, they always cared for people within the club and the community, so there’s no surprise to see the club make those steps.

“And as well as the players as well, their agreement to it and the way they wanted to go about it was very positive.

“Obviously being an ambassador for the Saints Foundation, having seen the great work that Greg Baker and his team do in the community, there’s no shock for me to see that the club acted in this way and the way they did it. It has been a very positive thing for us.”

The ‘Saints As One’ campaign was launched in late March to help support local communities during the pandemic, with Ward-Prowse delighted to see the club making an “impact beyond the football pitch” at this challenging time.

Chipping golf balls in the garden and man-marking son Oscar, who is nearly two and finds YouTube videos of his dad playing “hilarious”, are helping the midfielder get through the lockdown, as is Southampton’s demanding fitness regime.

Each player receives a tailored programme via an app with set physical outputs to achieve as Saints look to get their players as fit as possible for whenever the season finally resumes.

“We would love to be back playing football,” Ward-Prowse said.

“Everyone would like to go and watch it again, but there’s obviously more pressing matters and that will happen when it’s safe to do so.

“In the meantime we’ve just got to keep fit and be ready for whenever that will be.”

Saints are 14th in the standings and seven points above the drop zone with nine matches remaining, but Ward-Prowse is looking up rather than down.

“This period is giving everyone time to reflect, personally and stuff like that,” he added.

“But, yeah, for sure from the club’s point of view, we’re in a great position where, yeah, OK, we’re above the bottom three, but equally we’ve got a great foundation and base now to kick on up the league if we want to. It’s there for us.

“To finish in the top 10 would be a great achievement for us this year and I firmly believe we’ve got the ability and the team to do that.”