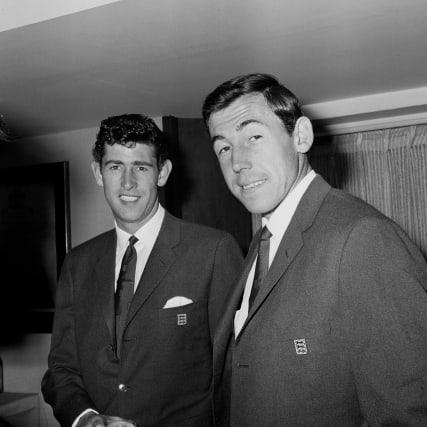 Peter Bonetti died on Sunday at the age of 78 and will be remembered as a fine goalkeeper – one that deserved far more than seven England caps.

The Chelsea great would have made many more appearances for the Three Lions had he not have been vying with World Cup-winning keeper Gordon Banks for a starting berth.

Here, the PA news agency lists the 10 most capped goalkeepers in England history.

The Birmingham shot-stopper made his debut against Wales in 1929 and was a mainstay between the sticks until his final match in 1936, which also came against the Welsh. He died in aged 77 in 1984.

Spells at QPR bookended a club career that was largely spent at Sheffield Wednesday, where he was for all of his caps. Springett was on the bench as England won the World Cup and belatedly receiving a winners’ medal in 2009. He died aged 80 in 2015.

The goalkeeper’s first four caps came at Leeds, with the rest coming during his time at Tottenham. Made his debut in 2003 on the same day at Wayne Rooney and was first-choice at the World Cup three years later.

England’s No.1 at Euro 2004 and brought into the starting line-up after an opening game error by Robert Green at the 2010 World Cup. James won caps at five different clubs: Liverpool, Aston Villa, West Ham, Manchester City and Portsmouth.

The Liverpool and Tottenham great was an England regular for much of the 1970s and early 1980s, before record-breaking Peter Shilton eventually got the nod.

The only goalkeeper on this illustrious list to have lifted a major trophy with England. The World Cup winner has gone down as one of the greatest, with his remarkable save from Pele regarded by some as the best ever stop. He died last year aged 81.

One of two goalkeepers on 75 caps. Made his debut as a QPR player in 1988 and went onto represent his country a further 74 times, including keeping the sticks at Euro 96. The Arsenal great played his last match for his country a few months after the 2002 World Cup.

England’s first choice for the previous three tournaments, he was an eye-catching omission from the 2018 World Cup squad and has not represented his country since November 2017. Represented England during spells at Manchester City, Torino and West Ham.

Nobody has represented England more than the goalkeeper, who made his debut in 1970 and was playing for his country up until the 1990 World Cup. The well-travelled shot-stopper looks unlikely to be knocked off the top of this list anytime soon.