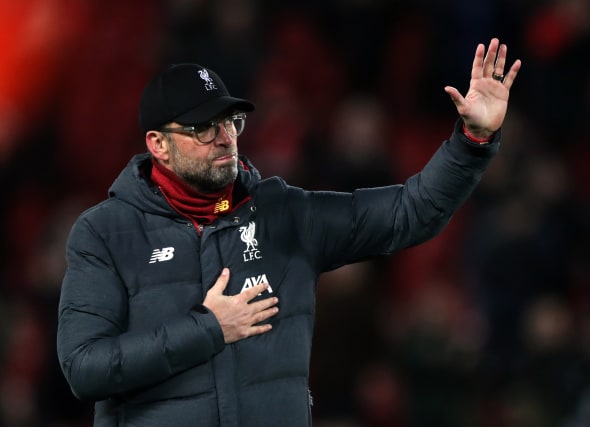 The 69-year-old former Reds player and manager was admitted to hospital on Wednesday for treatment on gallstones and subsequently tested positive for Covid-19 despite not showing symptoms.

He has since returned home and remains asymptomatic, but Klopp revealed the news was a concern for everyone connected with the club.

“It was a real shock three days ago when I heard about it first. The boys were sent a message in our WhatsApp group and everybody was like, ‘Wow’,” Klopp told the Liverpool website.

“What you feel in that moment is a massive difference if you know somebody who got the virus, or if you don’t know.

“In this moment, it was like, ‘wow, one of us has it’ and it was really crazy.

“We all know this terrible disease is causing heartache all over the world but this was the first time for many of us someone we have such a personal connection to was affected to this extent.

“I had the opportunity to text immediately with one of his daughters and we spoke about it. She was quite, not relaxed, but she was fine and said it looked all well – and two days later we heard he was released from hospital.

“We all know Kenny and we love him. We just sent him all our thoughts and prayers in that moment, but maybe he didn’t need it, which is even better.”

Tottenham have reversed their controversial decision to utilise the Government’s coronavirus job retention scheme and promised to pay all non-playing staff their wages in full.

Spurs chairman Daniel Levy acknowledged “criticism” that has been fierce and widespread since they announced plans at the end of March as to how they would cope with the Covid-19 fallout.

A statement from Spurs read: “In our last update we said we would keep our position under review, especially in the context of revised budgets and cost cutting.

“Having done so we have decided that all non-playing staff, whether full-time, casual or furloughed, will receive 100 per cent of their pay for April and May. Only the board will take salary reductions.”

Rory McIlroy believes the rescheduled Masters in November will have a different feel but could also aid his bid to complete the career grand slam.

The Masters, which should have concluded on Easter Sunday, is the only major that McIlroy has yet to win in his career and the Northern Irishman is hoping the dynamics of the November 12-15 slot can inspire a maiden victory at Augusta.

Speaking to Michelle Wie on an Instagram Live with Nike Golf, McIlroy said: “November is going to be different, very cold, the course could play very long. It plays long already but it can play very long. The greens may not be as fast as in April depending on the moisture.

“I think it will be a different feel, it’s at the back end of the year. Two of the majors have already been played, hopefully the Ryder Cup’s already been played. People will be in their routine and in the flow a little bit more.

“It’s going to be a different Masters this year but personally, maybe selfishly, that’s what I need to get the jacket.”