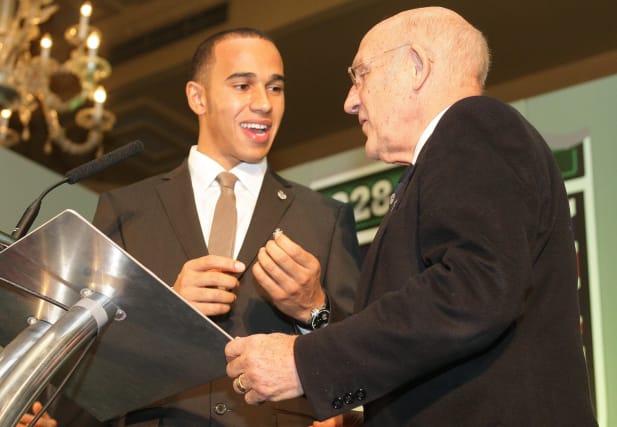 Moss, who was regarded as one of the greatest drivers in motor sport’s history despite never winning the F1 title, died aged 90 following a long illness.

Hamilton, who is a six-time world champion in the sport, led the tributes to a man who won a total of 212 of the 529 races he entered across multiple disciplines during his career.

“I think it’s important that we celebrate his incredible life and the great man he was.

“Saying goodbye is never easy and can be sad but he will always be here, in our memories and will always be such a huge part of British Motorsports Heritage.

“I certainly will miss our conversations. To be honest, it was such a unusual pairing, our friendship. Two people from massively different times and backgrounds but we clicked and ultimately found that the love for racing we both shared made us comrades.

“I am truly grateful to have had these special moments with him. Sending my prayers and thoughts to his family. May he rest in peace”.

Three-time world champion Sir Jackie Stewart, who came into the sport shortly after Moss’ retirement, said he looked up to him as he made his own way in the sport.

“I think he’s probably the best example of a racing driver there’s ever been,” Stewart told BBC Five Live.

Damon Hill, world champion in 1996, believed his victory at the 1955 Mille Miglia, in which he covered 1,000 miles of open Italian roads at an average speed of 97.96mph in 10 hours, seven minutes and 48 seconds, was his greatest achievement.

Hill added to Five Live: “He epitomised the idea of a racing driver. The guy cocked a snook at danger and took on an incredibly difficult challenge and prevailed. He was a winner.

“His achievement in the Mille Miglia in 1955 was one of the all-time great performances of our sport.

“The courage needed, the stamina needed and the concentration required for those lengths of time was remarkable.

“He never won a world championship but he won a lot of races, something like a third of all the races he entered. It’s a ridiculous statistic, he was legendary.”

His former team Mercedes tweeted: “The sporting world lost not only a true icon and a legend, but a gentleman. The Team and the Mercedes Motorsport family have lost a dear friend. Sir Stirling, we’ll miss you.”

Commentator and former F1 driver Martin Brundle paid tribute to “a mighty racer and gentleman”, David Coulthard said Moss “was the reason so many of us became racing drivers” while fellow British Grand Prix winner Johnny Herbert wrote that he was “world champion in all our eyes”.

Ferrari called Moss a “formidable opponent” while FIA president Jean Todt wrote: “He was a true legend in motor sport and he will remain so forever”.

Silverstone, the home of British racing, said: “In the history of motor racing, not just in his home country but also wherever he raced around the world, Sir Stirling held a unique status which continued throughout his life.”

Ex-England striker Gary Lineker and former heavyweight world champion Frank Bruno were among the other figures from the sporting world who paid tribute to Moss.