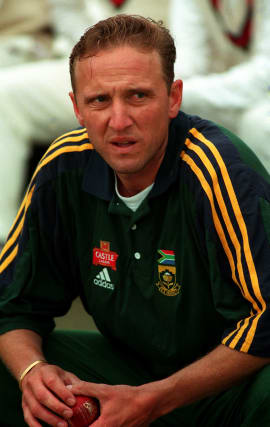 The coronavirus pandemic has brought sport to a halt, allowing time to look back on some of the best – and worst – moments.

Here, the PA news agency selects 10 of the most memorable mistakes in sporting history.

With 20 minutes to go in the three-match series, there was little to separate Australia and the British and Irish Lions in 1989. Step forward David Campese. After catching the ball behind his own posts, the Wallabies wing sensed a counter-attacking opportunity. He foolishly opted to advance forward and offload a perilous pass to team-mate Greg Martin. The ball fell to ground behind Martin, leaving the simplest of tries for Lions wing Ieaun Evans. The score, which came with the hosts leading 12-9 and the series level at 1-1, allowed Ian McGeechan’s men to go on and secure a 19-18 success in Sydney, becoming the first Lions side to come from 1-0 down to win a series. Meanwhile, Campese was heavily criticised in the Australian press.

England crashed out of the 1986 World Cup following a major blunder from Tunisian referee Ali Bin Nasser and his Bulgarian assistant Bogdan Dochev in a controversial 2-1 defeat to eventual winners Argentina. The pair failed to spot Diego Maradona punch home the opening goal of the quarter-final at the Estadio Azteca after rising above goalkeeper Peter Shilton, an incident dubbed the ‘Hand of God’. A dazzling second from Maradona four minutes later proved to be the winner, with a late strike from tournament top scorer Gary Lineker insufficient for incredulous England.

Engravers must surely have begun putting Wakefield Trinity’s name on the Challenge Cup when Don Fox stepped up to take a simple conversion in front of the posts in 1968. Ken Hirst’s try in the final play of the final had moved Trinity to within a point of opponents Leeds at 11-10. But, at the end of game played on a waterlogged Wembley pitch in front of more than 87,000 fans, Fox somehow got his two-point kick all wrong. He sliced the ball horribly, sending it spinning wide of the right post. Fox sunk to his knees as the jubilation of his team-mates quickly turned to despair, leaving Leeds to lift the trophy for the eighth time in their history in extremely fortunate circumstances.

An enthusiastic crowd thought they were about to witness the first royal victory in the Grand National for more than 50 years. Devon Loch, owned by the Queen Mother and ridden by Dick Francis, took up the running three fences from home in the 1956 race. But the nine-year-old inexplicably collapsed within sight of the winning post. Packed stands at Aintree were shocked into silence after Francis’ mount seemed to take a bad step around 50 yards from the finish before slithering along the turf to a halt. His nearest pursuer, ESB, quickly seized the initiative and galloped past to take the glory.

Rookie referee Stuart Attwell, aged just 25, and his assistant Nigel Bannister baffled fans at Watford in September 2008 by awarding a phantom goal to visitors Reading. Farcical scenes ensued when, following a 13th-minute Royals corner, Bannister flagged for a goal after the ball bounced over the line around four yards wide of the right post. The bizarre incident went down as a John Eustace own goal and caused Hornets boss Aidy Boothroyd – who saw his side concede a late Stephen Hunt penalty to draw 2-2 – to be sent off for his understandable protestations. “A monumental howler,” was Boothroyd’s damning verdict.

An embarrassing communication breakdown between batsmen Allan Donald and Lance Klusener cost South Africa a spot in the 1999 Cricket World Cup final. With three balls remaining at Edgbaston, the Proteas required a single run to defeat Australia. After mishitting a Damien Fleming delivery to Mark Waugh at mid-off, Klusener attempted to wrap up the contest with a risky single. Donald was not on the same wavelength and chose to remain in his crease at the non-striker’s end, leaving their opponents with a simple run-out. The match finished tied and Australia, who progressed due to finishing higher in the Super Six table, went on to be crowned champions by defeating Pakistan at Lord’s.

Golfer Roberto De Vicenzo was supposed to be facing Bob Goalby in an 18-hole play-off for the 1968 Masters. However, news broke that he had signed an incorrect scorecard. A player is responsible for the score on each hole of his own card and, while De Vicenzo was waiting for Goalby to finish, playing partner Tommy Aaron noticed the Argentinian had signed for a higher total than he had actually registered. After pointing out the error to a Masters official, the score stood and Goalby was confirmed as the champion.

Probably the most astonishing miss of the Premier League era was conjured up by former Liverpool player Ronny Rosenthal. In September 1992, the Israel forward latched on to a long ball from goalkeeper David James and expertly side-stepped Aston Villa keeper Nigel Spink. But, with the goal gaping, he somehow crashed the ball against the crossbar of the empty goal from close to the penalty spot. Rosenthal shrugged off the embarrassment to find the net later in the match but could not prevent Graeme Souness’ Reds suffering a 4-2 loss at Villa Park.

Undoubtedly the most painful entry on the list, diver Greg Louganis remarkably recovered from whacking his head on the three-metre springboard to win Olympic gold. The American suffered a concussion and required stitches having sustained a nasty-looking gash after misjudging a dive in the heats at Seoul in 1988. Leading by eight points, he left the board too straight while attempting a reverse two and a half somersault in pike position and clattered his head as he straightened out. Louganis ended the Games having retained gold in the three-metre springboard and 10-metre platform disciplines following his initial successes in Los Angeles four years earlier.

Possibly the most nonchalant own goal in history, Jamie Pollock’s solo effort helped relegate Manchester City to the third tier. Two years after Paul Gascoigne scored a wonder goal against Scotland at Euro ’96, Pollock went someway to recreating it in City’s penultimate game of the 1997-98 season, only at the wrong end of the field. Running towards his own penalty area, the midfielder stylishly lifted the ball over a QPR attacker, before producing a delightful looping header over goalkeeper Martyn Margetson. Despite a 5-2 win at Stoke on the final day, City went down, while Rangers – who left Maine Road with a 2-2 draw thanks to Pollock’s costly gaffe – finished a single point above them and survived.