Sporting film of the day – Battle of the Sexes 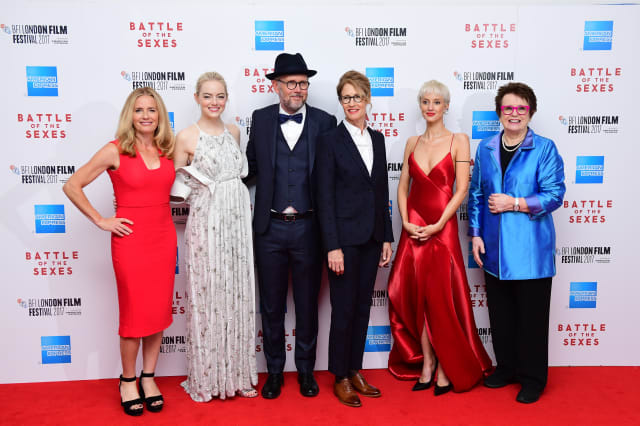 The main subject and final act of the film is the ‘Battle of the Sexes’ tennis match in 1973 between Billie Jean King and Bobby Riggs. The film starts three years earlier as a group of female players, led by King, form what becomes the WTA Tour as a reaction to women being paid significantly less prize money than men at tournaments. Riggs, a former grand slam champion in his 50s, is a prolific gambler and sees an opportunity to make money by challenging the leading women. King turns him down on numerous occasions but eventually agrees after Riggs plays and beats Margaret Court. Another central strand to the film sees King coming to terms with her sexuality and beginning an affair with a hairdresser.

The match at the Houston Astrodome was played in front of 30,472 spectators, which at the time was the biggest audience ever for a tennis contest. It was not overtaken until 2010, when 35,681 fans turned out to see Kim Clijsters defeat Serena Williams at an exhibition in Brussels.

The film is directed by Jonathan Dayton and Valerie Faris, whose debut feature was the Oscar-winning ‘Little Miss Sunshine’, and the A list cast do a fine job. A glossy Hollywood production is designed to appeal to a general audience and inevitably loses some depth, while the darker elements of the story are left alone, but it is an entertaining watch and care has been taken to make the tennis sequences look authentic – a notoriously difficult task. It was a critical hit and Stone and Carrell received several award nominations but its box office figures were disappointing and it fell well short of covering its costs.