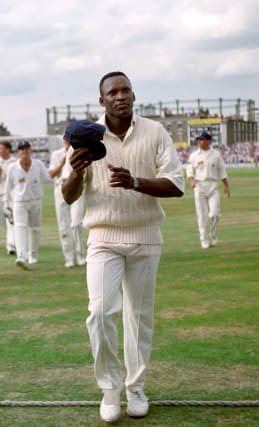 “You guys are history”. Four words Devon Malcolm supposedly uttered before delivering one of the finest and fieriest spells of fast bowling ever witnessed on August 20, 1994.

He was rewarded with extraordinary figures of nine for 57 against a shell-shocked South Africa at The Oval, reducing England’s 1-1 series draw to a mere footnote in the annals of time.

Here, the PA news agency takes a look at what is unquestionably the greatest day in Malcolm’s career.

Four years earlier, Malcolm returned to his birthplace in Kingston, Jamaica, and marked his second Test appearance by twice removing the great Viv Richards. In his third outing, he tamed a West Indies line-up containing Gordon Greenidge, Desmond Haynes and Richie Richardson en route to a 10-for. Nineteen wickets in four Tests in the Caribbean promised much but success thereafter was fleeting for Malcolm, whose raw pace was enough to make any batsman uncomfortable at the crease. However, when his radar was off, his confidence would dip sharply.

Malcolm had been in and out of the England line-up in the months leading up to the third and final Test against South Africa. Indeed, he had missed the first two matches but came back in to make use of a pacy pitch as England went with an all-seam attack in a series where they were trailing 1-0, having lost at Lord’s in a Test renowned for Mike Atherton’s ‘dirt in the pocket’ incident. There was no sense Malcolm’s return would be the spark England needed, though, as he finished with figures of one for 81 in South Africa’s first innings.

Malcolm had served some notice of intent as his bouncer rattled Jonty Rhodes on the helmet and led to the batsman retiring hurt. As England’s innings was winding to a conclusion, Fanie de Villiers returned the favour to Malcolm. The move would misfire spectacularly. Malcolm turned to a giggling slip cordon and is alleged to have told the South Africans in no uncertain terms what would happen. He told the BBC years later: “I did say something else which I can’t repeat, but as it happens I did exactly that.”

What followed was utter carnage as a fired-up Malcolm ripped through South Africa’s top order, leaving them three wickets down with only one run scored in their second innings as both Gary Kirsten and Hansie Cronje were sent packing. Only Daryll Cullinan was able to withstand what Malcolm threw at the touring batsmen, compiling a courageous 94 before being eighth man out to Darren Gough, depriving Malcolm of all 10 wickets. However, his nine-for was at the time the sixth best figures in Test history.

England were set what seemed a tricky chase of 204 but South Africa, perhaps still reeling from being annihilated by Malcolm, were unable to exert any pressure as the hosts wrapped up a comfortable eight-wicket victory. Unsurprisingly, Malcolm took the player of the match award as well as England’s player of the series – despite only featuring at The Oval. It was another false dawn for Malcolm, who played only another 12 Tests over the next three years and finished with a modest average of 37.09 after taking 128 wickets in 40 matches.
Read Full Story