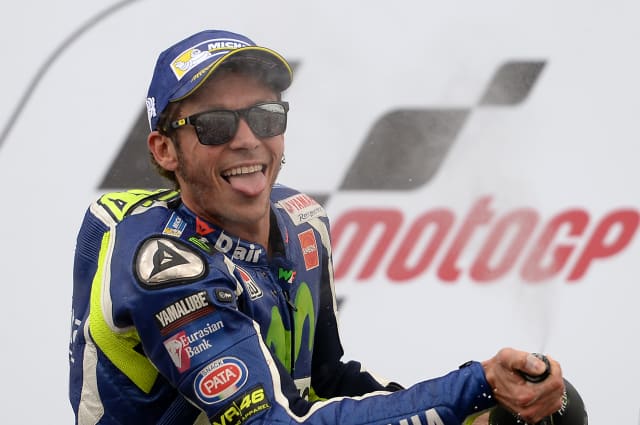 If the all-time top 10 MotoGP list was decided on popularity alone then Valentino Rossi would win by a knockout.

The likeable Italian, who goes by the nickname of The Doctor, has been dishing out the pain to his rivals for nearly a quarter of a century.

Lately Marc Marquez has challenged Rossi’s place as the modern-day successor to the great Giacomo Agostini.

Here, the PA news agency runs the rule over the top 10.

World titles: 7 (2001-2005, 2008-2009)
The most popular motorcycle racer of all time, Rossi is regarded as a hero by fans the world over. A MotoGP title winner with Honda and Yamaha, he failed to repeat that success during an ill-fated stint with Italian manufacturer Ducati. He has dabbled in F1 and rallying and his business interests include owning a motorcycle race team and producing merchandise for almost every other rider on the MotoGP grid. He also owns his hometown pizza restaurant.

World titles: 8 (1966-1972, 1975)
Ago dominated the world of motorcycle racing for 13 years, winning eight premier class titles and seven in the 250cc class. He also won 10 races at the Isle of Man TT. But following the death of a close friend at the TT in 1972 he led a boycott which resulted in it being dropped from the world championship schedule five years later. A motorcycle race winner at Daytona, he also competed in 23 F1 GPs.

World titles: 6 (2013-2014, 2016-2019)
The diminutive Spaniard arrived like a whirlwind in MotoGP in 2013, winning back-to-back titles and four successive championships from 2016 onwards. Marquez brought with him a new riding style which all of his rivals have been forced to copy. He began the 2020 season with younger brother Alex as his team-mate at Repsol Honda.

World titles: 5 (1994-1998)
The maverick Australian raced for Honda for 11 years from 1989 and they became the dominant pairing with five successive titles in the mid to late eighties. Following his retirement he unsuccessfully crashed on his F1 test and rally debuts. He has a rollercoaster named after him in Queensland.

World titles: 4 (1962-1965)
Known as Mike the Bike, Hailwood worked in the family motorcycle dealership before going on to race for Honda and MV Augusta, winning four successive world championships and 14 TT races before racing in F1 and at Le Mans in the 24 hour race. He was killed in a car crash, along with his nine-year-old daughter, in 1981.

World titles: 4 (1956, 1958-1960)
Revered by the likes of Rossi for being the only racer to win the premier class world title in both motorcycle and car racing. He raced for iconic brands Norton and MV Augusta before racing for F1 teams including Lotus and Ferrari, winning the 1964 title. He died in 2017.

World titles: 4 (1984, 1986, 1988-1989)
In a sport then dominated by tobacco company sponsorship Lawson won three titles for the Agostini Yamaha team during a six-year stint. A switch to Honda brought his last title in 1989. He finished his career with Italian manufacturer Cagiva in the early 1990s.

World titles: 3 (1978-1980)
Roberts was involved in one of the greatest ever races when he battled great rival Barry Sheene to win the 1979 British Grand Prix at Silverstone on the way to a second of three consecutive world titles. His son, Kenny Roberts Jnr, also won the world title in 2000.

World titles: 2 (2007, 2011)
A big rival to Rossi he achieved what his long-time nemesis could not do by winning the MotoGP title with Ducati in 2007. Following health issues, a return to Honda in 2011 earned the prickly Australian a second world crown.

World titles: 3 (2010, 2012, 2015)
The self-styled Spartan of motorcycle racing has three premier class world titles to his name but a disastrous stint with Ducati in 2017-18 took the shine off his achievements. He returned to Yamaha earlier this year as a test rider after retiring from racing.