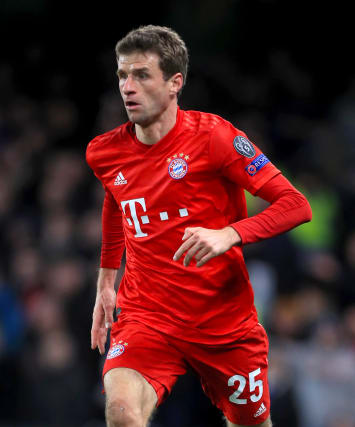 Long-serving forward Thomas Muller has signed a two-year contract extension at Bayern Munich, keeping him at the club until June 2023.

The 2014 World Cup winner has been at the Bavarian club since the age of 10 and has become a mainstay in the first-team since breaking through from the youth academy in 2009.

Muller has made over 500 appearances for Bayern and has won eight Bundesliga titles, five German Cups and five German Super Cups in addition to the 2013 Champions League.

The 30-year-old, who had been linked with a move away in recent seasons, told the club’s official website: “I’m sure that once we’re playing again, we’ll continue to be very successful. That spurs me on.

“For me, the number one priority was to extend at FC Bayern – and the club felt the same way.

“This club is not just any old employer for me. It’s my passion. I’m happy that I’ll be here for two extra years, and I’ll give everything on and off the pitch.”