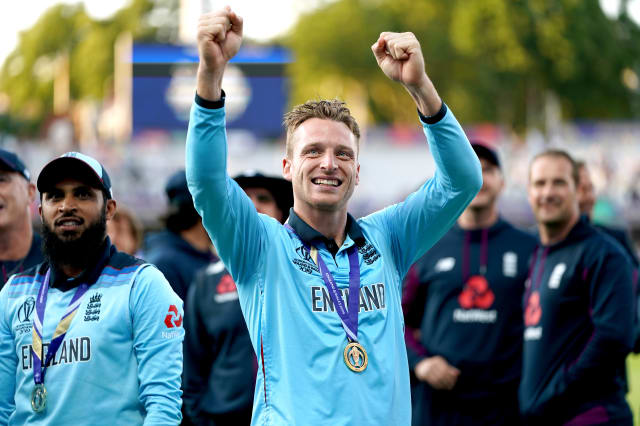 Jos Buttler’s status as an England World Cup winner has already assured his place in the history books but the shirt he wore at the decisive moment last summer could soon secure a more immediate legacy: helping save lives threatened by coronavirus.

Buttler was the man whose run out of New Zealand Martin Guptill secured the trophy at Lord’s and he made a remarkable gesture last week when he revealed the matchworn jersey would be listed on auction site Ebay on behalf of the Royal Brompton Hospital.

Bids are due to close just before 7.30pm on Tuesday night and the prospect of owning the prized memento has already generated offers in excess of £65,000.

That money will effectively enable the purchase of a high-tech life support machine for the heart and lung specialist facility, which is on the frontline of the country’s pandemic response.

“I think £65,000 is an amazing amount of money and, having spoken to the guys at the hospitals, I know what that can buy them. That’s an ECMO (extra corporeal membrane oxygenation) machine,” he said.

“That machine is vital not just for Covid-19 patients but all heart and lung patients. The Royal Brompton is one of only five ECMO centres in the UK so that’s going to be a big thing for them. It’s a very special shirt to me but I think it takes on extra meaning now.”

Discussing his personal link to the cause, Buttler explained that an auntie of his wife Louise worked as the hospital’s head of paediatrics, planting the seed for his show of solidarity.

“When this outbreak started we were just speaking to her about what it’s like and is there anything we could do to help?” He said.

“The doctors and nurses have been working incredibly long hours, struggling for simple things like snacks and toiletries that they needed and she said there was a donation we could make on her page, which I did and a few of the other England players did. She also told us about an emergency appeal the hospital had started.

“They were looking to raise £100,000 to buy emergency equipment and I said to Louise we could auction my World Cup shirt.”

Buttler hinted that the winning bidder may have to hold their nose when the delivery arrives, having worked and played hard in his kit.

“There were 50 overs of fielding and the super over that’s the shirt so it smells pretty authentic,” he laughed.

“I probably took it off about 7am the next morning. They were great times,…we headed back to the hotel bar with everyone still in full kit. It’s seen it all, that shirt.”

Buttler followed up his personal donation by joining the rest of his centrally contracted England team-mates in stumping up the equivalent of 20 per cent of their ECB salaries for the next three months.

The precise beneficiaries of that sacrifice were unclear at the time but Buttler has revealed the squad are keen for it to help keep afloat recreational cricket, rather than covering expected shortfalls at the professional level.

“I hope the money can be used in all the areas where it is really needed,” he said.

“There are so many different areas that are going to be affected – grassroots, youth coaching and disability sports.

“All the areas I think the players would love that money to go towards are those kinds of community things.

“As players we’re all very aware of the other affects this is going to have drip feeding down into the game and without grassroots cricket we’re nothing really.

“That’s the people we’re trying to inspire. That’s the whole point of something like The Hundred, to inspire a new generation and bring new people into the game.

“So I know the players are very strong on wanting that money to help that grassroots structure and pathway because we need to bring people into the game and make sure that is very strong.”

:: Bids for Jos Buttler’s shirt can be made at http://bit.ly/JosShirtAuction