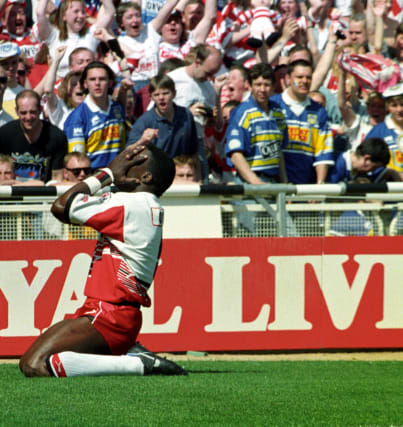 As with all sports, rugby league has been brought to a halt by the coronavirus crisis, offering the opportunity to reflect on some of the greats the nation has produced down the years.

Here the PA news agency picks 10 of the finest players to have represented Great Britain in Tests.

The Cardiff-born Boston switched codes by joining Wigan in 1953 and spent the next 15 years in the Cherry and White, scoring a club-record 478 tries in 488 appearances. He finished his career at Blackpool Borough in 1970 having scored a total of 571 tries, the second-highest in rugby league history.  He also won 31 caps for Great Britain and was part of the team that won the 1960 World Cup.

The Prince of centres, Wagstaff became the youngest-ever professional rugby league player when he signed for Huddersfield at the age  of 15 and played for Yorkshire at 17. He captained Huddersfield when 19, leading them to all four cups in 1914-15, and at 21 was named captain of Great Britain. Wagstaff retired at the age of 34 having won three league championships and three Challenge Cups, and died at 48.

The former St Helens favourite is widely acknowledged as one of the greatest half-backs in the history of the game. He won 27 Great Britain caps and made history by captaining three clubs, St Helens, Leigh and Warrington, to victory in the Challenge Cup final at Wembley.

The former Widnes and Wigan winger is still the most prolific try-scoring Englishman of all time. His total of 501 tries is third only to Australian Brian Bevan and Welshman Billy Boston. He was named Man of Steel at the end of his first season in 1988 and helped Widnes to successive titles between 1987 and 1989 before joining Wigan for a record £440,000 transfer fee in January 1992. He ran in 26 tries in 33 Test appearances.

The youngest of three brothers from the Wakefield pit village of Sharlston, Neil Fox plundered a world record 6,220 points in a career that spanned three decades and included two spells at both Wakefield and Bradford from 1955 to 1979. He went on to win 29 caps, scoring 14 tries and kicking 93 goals for a total of 228 points, and went on the 1962 Lions tour to Australia, New Zealand and South Africa.

The game’s most successful player with 37 winners’ medals, Edwards was a key part of the all-conquering Wigan team of the 1980s and 1990s which lifted the Challenge Cup for eight consecutive years. He was named Man of Steel in 1990, won 36 Great Britain caps and appeared in three World Cups before going on the carve out an equally successful career in coaching in rugby union.

Reilly was a trailblazer of the English game, dominating Australian Rugby League, while leading Castleford with great success. He won a host of honours as both player and coach on both sides of the world and remains the only Englishman to win both the Challenge Cup and Australian Grand Finals in both capacities. A lynchpin of the last Great Britain team to win an Ashes series in 1970.

The ‘Black Pearl’ won 36 caps for Great Britain and both captained and coached his country. He played for Bradford, Wigan, Balmain, Western Suburbs and Leeds over a 19-year career from 1978-97 and won the Man of Steel Award a record three times. He also won the Lance Todd Trophy and the Golden Boot and was awarded the MBE in January 1990.

A World Cup winner at the age of 20 in 1954, Sullivan went on to achieve a record haul of 46 Great Britain caps which was subsequently equalled by Garry Schofield.  The Dewsbury-born winger scored 41 tries for his country and totalled 342 throughout his career which took in spells with Huddersfield, Wigan and St Helens and was the league’s leading scorer in 1957-58 with 50.

A four-time Lions tourist, Schofield matched Mick Sullivan͛’s record of 46 caps during a prolific career with Hull and Leeds. The 1992 World Cup Final captain was the subject of a record £155,000 transfer to Leeds in 1987 and poached 328 tries in a British career of almost 500 games, racking up 1,731 points in the process. He was a Golden Boot winner in 1990 and landed the Man of Steel award in 1991.

Goldthorpe was one of the most widely-respected talents in the game at the time of the Northern Union’s formation in 1895. He began a career spanning four decades with Hunslet at the age of 16 in 1888 and, when he retired in 1910, he had scored over 1,500 points in 659 games. In the 1907-08 season, Goldthorpe led Hunslet to all four domestic trophies.