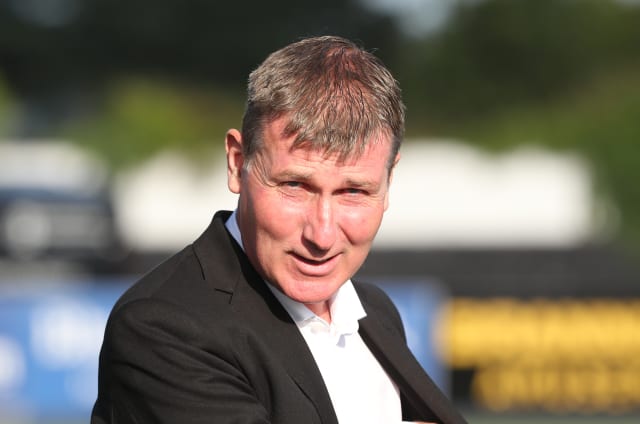 The Football Association of Ireland has responded to the lengthy delay in the sport by bringing forward Stephen Kenny’s appointment as manager of the Republic of Ireland’s senior side.

With Mick McCarthy’s second reign now over, the PA news agency considers what Kenny’s first steps should be.

Find a way to get some goals

During the Euro 2020 qualifying campaign McCarthy’s side scored only seven times in eight matches, with one of those an own-goal. A 1-0 win against lowly Gibraltar was perhaps the most glaring demonstration of the struggles in attack and Kenny simply has to find a cutting edge. The job will not be easy, with only two current players boasting double figures on the international stage (Shane Long, 17, and James McClean, 10), so Kenny must unearth a poacher or sharpen the instincts of the ones who are currently on board.

Kenny has won admirers for the expansive brand of football he has encouraged, predominantly at Dundalk but also since beginning work with the under-21s. It is no secret that the task ahead represents a considerable step change, with quality of opponents, levels of scrutiny and external pressures all raised to a level he has not experienced before. Now is not the time to dial back his natural instincts, though, and he must live up to expectations that he will encourage more progressive tactics.

Kenny has worked closely with former Blackburn midfielder Keith Andrews since joining the FAI and all expectations are that the pair will move up together. Robbie Keane, the country’s record goalscorer, is already on the staff and has not been stood down alongside McCarthy and his assistant Terry Connor. Kenny must decide how he can best use Keane, while further additions are likely. Damien Duff, currently with Celtic reserves, has been mooted and would probably be permitted to continue his club commitments.

Focus on the next generation

Like any international side at a time of renewal, much emphasis is placed on the rising stars of the future. As such, one of Kenny’s key tasks will be identifying and integrating those inexperienced prospects who might carry the green shirt forward in the years to come. His work with the under-21s means he already has a head start, but the hard part may be accelerating the development process. Troy Parrott probably carries the highest hopes but has minimal first-team opportunities at Tottenham, while Aaron Connolly (Brighton) and Michael Obafemi (Southampton) are also fighting for scraps. Caoimhin Kelleher, Luca Connell and Nathan Collins are others who may also find themselves involved.

Get the fans on side

Managing the 11 players on the pitch should always be the priority, but Kenny would also be advised to pay close attention to the PR game. For a number of years the Republic’s leadership has enjoyed different kinds of rocky relationships with the supporters – be it a lack of faith in Steve Staunton, a lack of communication under Giovanni Trapattoni or a lack of rapport with Martin O’Neill. Kenny must be honest, open and good humoured about the challenges ahead. A sense of humility and clarity about his plans will go a long way to setting the foundations amongst the fanbase.