Picture of the Day – April 5 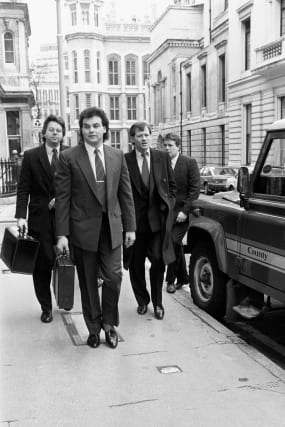 Alex Higgins arrives at the Law Society’s offices to face three charges of alleged misconduct at a disciplinary hearing set up by the World Professional Billiards and Snooker Association.

The combustible Northern Irishman was no stranger to facing a disciplinary hearing during his 26-year professional career.

During the UK Championship in 1986, ‘The Hurricane’ head-butted a tournament official during an argument, earning himself a ban for five tournaments and a £12,000 fine, not to mention a conviction for assault and criminal damage.

In 1990, Higgins threatened to have fellow player and compatriot Dennis Taylor shot during the World Cup, while he punched a tournament official during the World Championship after losing his first round match to Steve James.

Higgins was subsequently banned for the rest of the season and the next.

Having first been diagnosed with throat cancer in 1998, the two-time world champion died in 2010 at the age of 61 from multiple causes.