Sporting film of the day – Rush 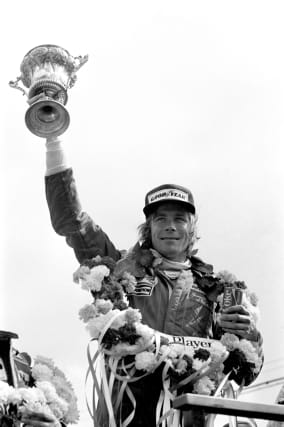 This 1970s Formula One movie tells the story of the rivalry between the ice-cold Niki Lauda and playboy heartthrob James Hunt. It is a clash of egos that begins in the lower formulas and goes right to the top of motorsport’s premier code, catapulting the sport into the mainstream in the process. The centre-piece is the battle for 1976 world championship. This was an era when drivers knew the risks to their lives were great. Hunt comes across as carefree, unlikely to match the disciplined brilliance of Lauda. Yet it is the Austrian who pays the heaviest price, suffering the serious injuries in a crash that would shape the rest of his life.

Australian actor Chris Hemsworth plays the flamboyant Hunt, whose good looks and fancy-free nature helped make Formula One so glamorous and alluring. Daniel Bruhl gives a star turn as Lauda, managing to both look and sound like the steely and blunt-speaking three-time world champion. In support the wives of both drivers are well played Olivia Wilde (Suzy Hunt) and Alexandra Maria Lara (Marlene Lauda).

This adrenaline-fuelled ride into 1970s Formula One, directed by Ron Howard, is both gripping and awe-inspiring. The clash of personalities between Hunt and Lauda propels the film along but there is also much more to admire. The attention to detail is particularly impressive, with circuits looking as they would have done and all cars and helmets authentic. The thrill of life on the track and the dangers that go with it – as seen vividly in Lauda’s crash – are well captured. In reality, Hunt and Lauda got on much better than is depicted but it is still a great snapshot of a golden era.

“Twenty-five drivers start each season in Formula One and each year two of us die. What kind of person does a job like this? Not normal men, for sure. Rebels, lunatics, dreamers. People who are desperate to make a mark and are prepared to die trying.”

Bruhl, as Lauda, sets the tone early on.