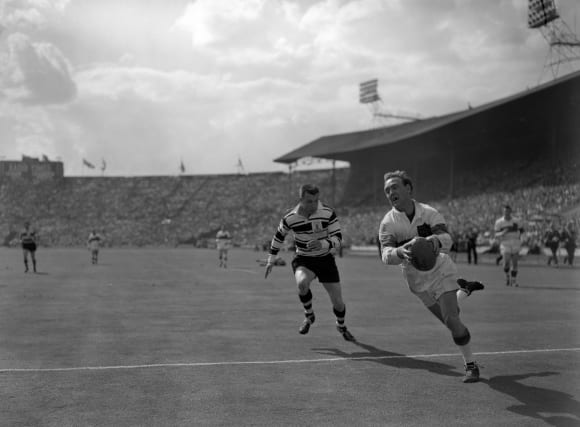 Despite success on the field, coal miner-turned-rising rugby star Frank Machin senses the emerging emptiness of his life as his inner angst begins to materialise through aggression and brutality, so he attempts to woo his landlady Margaret Hammond in the hope of finding a reason to live. Based on the novel by David Storey, a one-time rugby league player who also wrote the screenplay, the film was nominated for two Oscars.

There was a first starring role for Richard Harris, who won the Best Actor Award at the 1963 Cannes Film Festival, while co-star Rachel Roberts won her second BAFTA award and received an Oscar nomination for Best Actress. A remarkable supporting cast was made of a who’s who of talent including Leonard Rossiter, Arthur Lowe, William Hartnell, Colin Blakely and George Sewell, who all went on to achieve greatness in the film and television world.

Action shots were filmed at Wakefield’s Belle Vue ground, which is largely unchanged 57 years on, and Halifax’s Thrum Hall, which no longer exists. In a bid for authenticity, former Wakefield Trinity trainer Ken Traill played himself and several players and fans enjoyed roles as extras.

The rawness of the film proved shocking at the time with few bright spots to lighten its dark mood ahead of a tragic finale. It received mixed reviews at the time but there is little doubt it was ground-breaking and certainly helped put several budding actors on the road to fame and fortune.