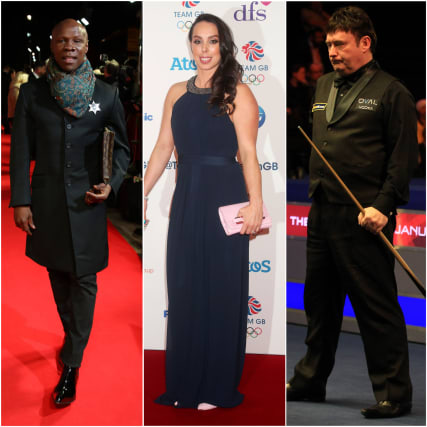 John Fashanu and Tony Bellew are the latest sports stars to enter the realms of reality TV after being confirmed as contestants on the upcoming Channel 4 series Celebrity SAS: Who Dares Wins.

Here the PA news agency takes a look back at five other sporting heroes who have stepped out of their respective comfort zones to test themselves in jungles and ballrooms.

The snooker star was a surprise hit in the 2009 edition of ‘I’m a Celebrity Get Me Out Of Here’, managing to avoid eviction and stay for the duration. However, the six-time world final runner-up was forced to a face up to a familiar agony as he was pipped by Kim Woodburn and Gino D’Acampo, and had to settle for another near-miss.

During his unbeaten boxing career, Calzaghe earned a reputation for dazzling hand and foot-speed, so he seemed a natural contestant for the 2009 edition of ‘Strictly Come Dancing’. Sadly, he wasn’t. Calzaghe was hauled through five eliminations by his partner Kristina Rihanoff – and most likely half of Wales – before his agony was finally and belatedly curtailed.

As reality TV ideas go, Channel 4’s ‘The Jump’ – in which celebrities were trained to perform various nerve-shredding Winter Olympic exploits – teetered on the brink of recklessness. It was abandoned after four series following a series of injuries to athletes, including gymnast Beth Tweddle who required surgery on her neck and spinal cord after crashing into a barrier during training.

The laid-back cricket star was thrust into a brand new career after being declared winner of I’m a Celebrity in 2003, less than 12 months after wrapping up his sports career. Tufnell made full use of his unlikely fame, going on to appear on a string of further reality shows, including Strictly six years later.

Eubank may have enjoyed an exciting fighting career but he suffered a clattering knockout from ‘Celebrity Big Brother’, suffering the indignity of being the first star sent out of the first series in 2001. Shrugging off his ignominious exit, which was voted for by the British public, Eubank said: “I was very easy with it. I fought for a living.” Eubank also entered the jungle.