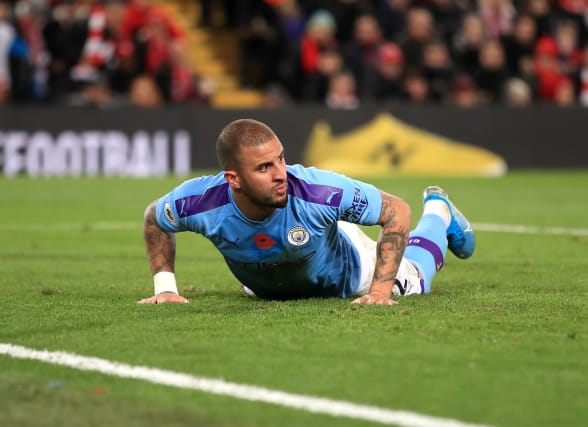 Kyle Walker is finding the coronavirus lockdown tough but the Manchester City right-back knows this is the time to “bite the bullet” and think of others.

Top-level football across the world is suspended currently due to the Covid-19 pandemic that continues to escalate.

It is 24 days since reigning Premier League champions City last took the field, with the suspension of matches compounded by a Government-imposed lockdown that has prevented training.

Instead, footballers across the land are working in isolation – something that Walker, whose last appearance came in the Carabao Cup final win against Aston Villa on March 1, might find difficult but knows is far bigger than football.

“It’s been tough, but first and foremost, we have to think about other people’s health and protecting the elderly and family members that can spread it,” the England international said.

“As a footballer that is used to a day-to-day routine and structure to your life, it is tough.

“I think it is something where we have to just bite the bullet and think about others rather than yourselves.”

Walker has three boys to kickaround with at home but is missing the dressing room banter, even if technology is providing a steady feed of laughter.

“We have jumped on HouseParty a few times and kind of got the banter going,” he said. “You have got the group chat that is always going off on some sort of madness.

“I think it is about mainly keeping the brain active. Obviously keeping yourselves active where, us as footballers, we have been provided with the gym equipment that Manchester City have given us and the bike and the programmes that we have carried out to make sure we are fine when we start the season, fingers crossed, again.”

One omission from those conversations is manager Pep Guardiola, who may not appreciate some of the content flying around.

But Walker has been in contact with the City manager, who has donated one million euros (£918,000) to the fight against Covid-19 in Spain.

“Obviously Pep is not in the group chat!” the full-back said.

“I dropped him a text message last night saying hope you are OK, and I hope the family is well and fair play for donating the amount of money that you have donated. That says a lot about him as a person.

“Put football aside, that has come from his heart and it is something that should definitely be recognised.”

Guardiola urged fans to keep safe by staying at home as the club launched their ‘Cityzens At Home’ website on Monday and Walker echoed those sentiments.

“It is plain and simple: follow the guidelines,” he added. “It is important that we all do our part here. Even if you are not affected or showing symptoms, don’t take it for granted.

“Football has to take a back step for now because that is the least important thing on everyone’s mind in the football world. The health of family members and other people’s family members is the most important.

“But, I hope, and I am sure everybody else hopes, that football will come back and we will be able to finish off the season, but if it is not a possibility, then everyone does understand that people’s health is more important than a game of sport.”