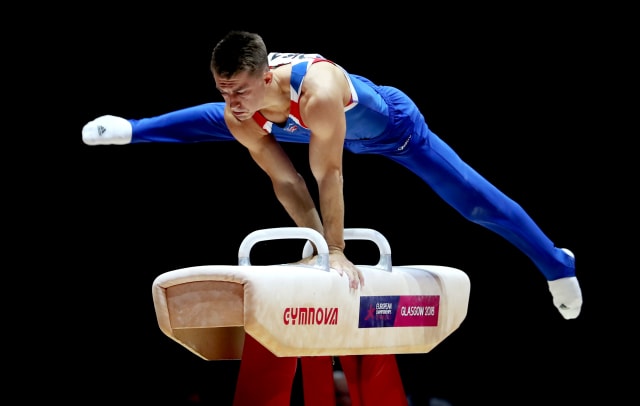 We may emerge from our enforced hibernation with precarious bank balances and a chronic Vitamin D deficiency, but the nation’s self-isolated sports stars are ensuring we will do so improbably fit and finely chiselled.

Max Whitlock was the latest leading athlete to kick off an online fitness series on Tuesday, his twice-weekly #gymnasticswithmax designed to appeal to a range of viewers from mere keep-fit enthusiasts to Olympic wannabes.

Clutching a couple of bourbon creams for essential sustenance, I propped up a laptop on a sub-Alpine stack of toilet rolls and coerced a home-schooling 12-year-old into putting his routine through a road-test.

The first series of manoeuvres – the beginner-with-biscuit level – were simple enough. A couple of shake-downs and hops-on-the-spot, and it was time to take the first bourbon break before things really started to get testing.

Sprinkled with adorable interludes in which his 13-month-old daughter Willo wobbled into shot (already, it has to be said, looking more sure on her feet than your PA news agency representative), Max moved on to something he called the four-minute, full-body workout.

The 12-year-old, having steadily gone stir-crazy over the past fortnight of confinement, bounced, stretched and balanced her way through the routine with a panache that I considered, frankly, to have been more than enough for two.

A timely beer delivery interrupted the beginning of the next segment. The 12-year-old was twisted in knots on the living room rug by the time I ambled back in, unsuccessfully seeking to mimic Max, who was happily chatting away mid-handstand.

Quickly coming over all Louis Theroux, I considered my time with Max was coming to an end.

Tennis players, cricketers, and a veritable peloton of British cyclists have been posting fitness classes and challenges of their own since the government announced its strict isolation measures two weeks ago.

As the saying goes, there is something for everyone. My personal choice involves flicking over to a Netflix box-set.

The 12-year-old skipped, suitably refreshed, back to Google classroom. I admired my new four-pack with pride.