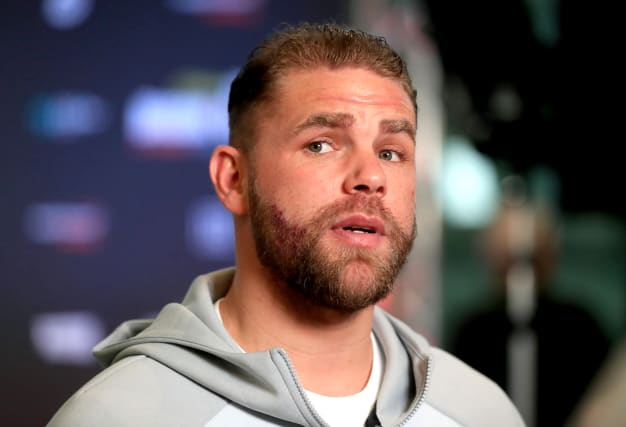 Billy Joe Saunders has had his license to fight suspended by the British Boxing Board of Control after a video on social media emerged in which he advised men how to hit their female partners.

The WBO super-middleweight champion used a punch bag to demonstrate how to react if “your old woman is giving you mouth” in a video his own promoter Eddie Hearn described as “idiotic” and “unacceptable”.

Saunders himself admitted he made “a silly mistake”, insisting his intention was not to condone spousal abuse before saying he will donate £25,000 to domestic violence charities.

But he will also have to answer to the BBBofC, which said in a statement: “The British Boxing Board of Control, having considered comments made by Billy Joe Saunders on social media, have suspended his boxer’s licence pending a hearing under the board’s misconduct regulation, at a time and venue to be confirmed as soon as possible.”

This is not the first time the unbeaten Saunders has attracted the attention of the BBBofC, which fined the Hertfordshire southpaw £100,000 in September 2018 following a social media video in which he encouraged a woman to perform a sex act in exchange for £150 worth of drugs.

Speaking to talkSPORT to discuss his latest misdemeanour, Saunders said: “I said it as a bit of a joke at first. I wasn’t obviously thinking.

“It was a silly mistake but I didn’t mean to cause any harm to anyone and I certainly wouldn’t promote domestic violence. I thought I would make a few people laugh but obviously it has flipped on the other side with people.”

Saunders was close to arranging a fight with Mexican superstar Saul ‘Canelo’ Alvarez in Las Vegas on May 2 before the outbreak of the coronavirus pandemic led to a shutdown of all major sporting events.

The former WBO middleweight champion added: “I didn’t mean for anyone to get upset about it. There are people dying all around the world with coronavirus and I was just trying to take the heat off that a little bit.

“It clearly hasn’t done, my sense of humour is not everyone’s cup of tea.

“I can only take it back and apologise, I will be donating £25,000 to support the domestic violence charity.

“It wasn’t meant to be suggesting ‘go and hit your wife and your loved ones’. It wasn’t really done for social media likes, it was done out of pure careless thought.”

Hearn added on talkSPORT: “I haven’t spoke to (Saunders). I spoke to his management team last night. I was appalled really.

“The world has changed and realised about all kinds of different things, about how you need to treat people.

Hola Fernando – a look at Alonso’s F1 highs and lows