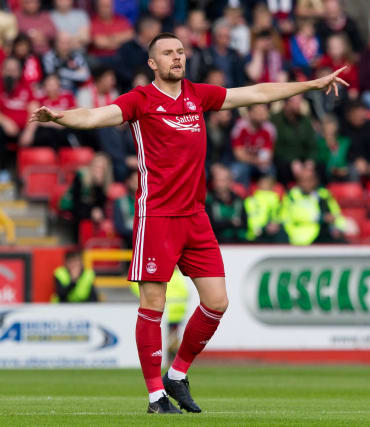 Michael Devlin admits he and his Aberdeen team-mates are struggling to see how the season can be finished.

The defender and his Dons colleagues had already travelled to face Motherwell when Scottish football was suspended on the day of their crucial Ladbrokes Premiership fixture on March 13.

Aberdeen were looking to leapfrog Well into third spot but Devlin accepts that chance might have gone completely.

Scotland’s chief medical officer, Catherine Calderwood, has predicted restrictions on movement will be needed for “at least 13 weeks”, virtually ruling out UEFA’s ambition to see domestic leagues completed by June 30.

And Devlin feels there will be too many complications in trying to resume the season at a later date.

The Scotland international told his club’s RedTV service: “We as footballers would always rather finish the season. Certainly from an Aberdeen perspective we have got third place, or we had third place, to chase. If the league were to stop we relinquish our ability to change our position.

“But there is no outcome that pleases everybody. Everyone has to understand that, no matter what happens here, someone will feel hard done by.

“The overwhelming feeling, from my understanding, it’s very difficult to see how the league will continue without disrupting next season.

“And I think that will be the priority. As much as of course we want to finish this season then I’m not quite sure how we do that if we extend the season, with the added complication in Scotland that contracts expire at the end of May.

“To play into June and July, do we ask players to sign contract extensions? If a club haven’t offered you a longer-term deal do you sign a one-month extension to play a few games. What if you get injured? Who then looks after your rehab? There are a lot of things to consider.

“It’s a frightening time when you weigh up all the pros and cons to whatever the outcome is going to be.

“Amongst the boys, everyone sees it very difficult for the league to continue as it is.

“I must say, I am delighted I am not part of the panel making that decision because I don’t envy them whatsoever.”

Devlin’s comments came as reports emerged that Hibernian had held talks with players over deferring a proportion of their wages until football resumes.

Hibs owner Ron Gordon last week admitted the coronavirus outbreak had put the club “under the most severe strain and threat” and warned of “difficult decisions” ahead.

Scotland’s league clubs held talks on Friday over how to negotiate the financial crisis and deal with players’ wages and contracts.

Hearts are among the clubs to have asked players to take a pay cut – 50 per cent in their case – and they admitted this weekend that they were keeping the option of suspending contracts on the table “on the advice of the SPFL and its legal advisors”.