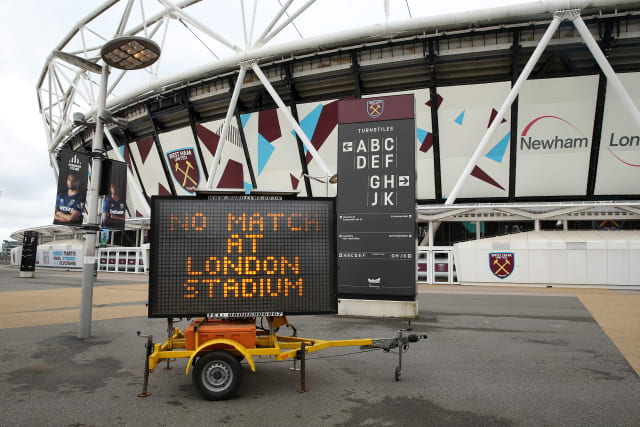 West Ham vice-chairman Karren Brady maintains Premier League clubs are determined to deliver an end to the season when safe to resume playing, even if it runs into July.

The Premier League, English Football League and Professional Footballers’ Association met on Friday to discuss the economic implications of the suspension of the season.

There will be further talks in the coming week, with the projected restart of the season currently being April 30.

However, with the country currently in lockdown, that appears a very optimistic target date.

Nevertheless, there remains a consensus to try to complete the current campaign, with the possibility of matches being played initially behind closed doors when it is deemed safe to do so.

Brady confirmed in her column in The Sun that West Ham have eight players in self-isolation showing mild symptoms of coronavirus and “seem to be well”.

David Moyes’ squad all have fitness programmes to do at home, with the current plan that they will resume training when the current lockdown period ends on April 13, should further restrictions not be imposed.

“When we – all Prem clubs – last spoke, we agreed to get going again as soon as possible,” Brady said.

“And that games will run into July, if required, to get this campaign finished. This is the plan. This is what we want to deliver.

“It may be games have to be played behind closed doors, which no one wants – especially the players and fans.

“But we hope it might just be possible to go ahead once the sharp graph of it bottoms out.”

“Nobody knows when this pandemic will end,” Ceferin said in an interview with Italian media outlet La Repubblica.

“There is a plan A, B and C. We can start in May, in June or the end of June. If we can’t do it on any of those three dates then the season probably would be lost.

“There is also the possibility to finish the season at the start of next season, with next season starting a little late. It would have to work with respect to the players and the signing periods.”

In Italy, Juventus players have agreed to waive four months’ wages due to the pandemic.

Cristiano Ronaldo and his team-mates, along with manager Maurizio Sarri, have agreed to a reduction in pay “equal to the monthly payments of March, April, May and June 2020”, the Serie A giants said in a statement.

The agreement is set to be worth around 90 million euros (£80million) to the reigning champions.

If the remaining games of the current campaign are rescheduled, Juventus said they would negotiate increases in pay for the squad.

Closer to home, no professional cricket will be played before May 28, which means the traditional start of the County Championship season – which was due to begin on April 12 – faces a lengthy delay.

Former England captain Sir Alastair Cook would prefer for the competition not to be played at all this season, rather than attempting to hold a dramatically condensed campaign.

“Whatever happens, if we do play any sort of cricket, which hopefully we will, what I hope is that they don’t try and have a six-game County Championship or something like that,” Cook, who won the Division One title with Essex last season, told BBC Radio 5 Live.

“If there is no time for a meaningful County Championship, say (you can only play) three or four games, there is probably not much sense us having it.”

The Ryder Cup between Europe and the United States is scheduled to be played at Whistling Straits in September, but still remains in doubt.

England’s Tommy Fleetwood said on BBC Radio 5 Live: “I think there are certain events that would be an amazing torch for a turn in how the world is getting on and the Ryder Cup would be one of them that is like a shining light at the end of the tunnel.

“The Ryder Cup is an event people dream about and sometimes it can only happen once.”

Ferrari boss Mattia Binotto feels Formula One could bring in shorter grand prix weekends and push on into January 2021 to put together a meaningful season.

“We are in constant dialogue. I have felt, along with the other team principals, that these are decisive moments,” Binotto told Sky Sport Italia.

“We’ve decided to give complete freedom to (F1 chief executive Chase) Carey and the FIA to put together as soon as possible a timetable for us to get racing again, we are willing on our side.

The Belarusian Premier League is the only European football still going on, with officials refusing to follow the rest of the continent by suspending sport.

BATE Borisov fell to a second defeat on Saturday, going down 2-1 to Slavia-Mozyr.

Later on Saturday, FC Minsk beat city rivals Dinamo Minsk 3-2 to sit top of the table with a 100 per cent record from two matches.

Sweden had some friendlies being played, but mostly in lower divisions.

The only professional basketball in the world, meanwhile, is being played in the Tajikistan Primary League.

The mountainous central Asian nation is one of less than 20 countries yet to declare a single coronavirus case.

There were three matches in the sport’s domestic top flight, as leaders Dushanbe beat the Legends 124-74, Zuhro got the better of Berkut, while Diesel Power edged past Faeton 82-74 in overtime.