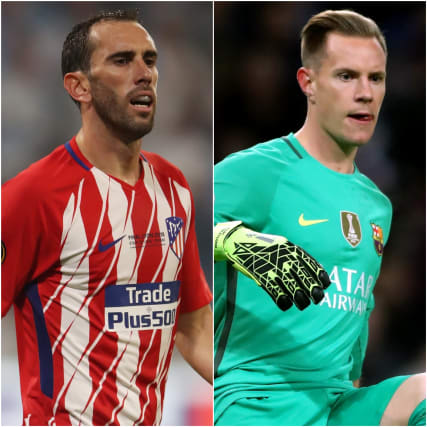 Two years after Jose Mourinho failed to sign Diego Godin while at Manchester United, the Inter Milan centre-back is once again believed to be in the Tottenham manager’s sights. The Daily Mirror reports that Mourinho is keen on bringing the 34-year-old defender in to help bolster his backline.

Barcelona goalkeeper Marc-Andre Ter Stegen is reportedly the target for a planned world-record bid from Bayern Munich. The Daily Mirror says the club are willing to pay up to £90 million for the 28-year-old German.

Arsenal are interested in Valencia midfielder Carlos Soler, according to The Sun. Although the 23-year-old only recently signed a new deal with the club, Valencia could be forced to part ways with Soler in order to drum up some funds to help balance their books.

Martin Braithwaite: The Barcelona and Denmark striker is on the radar of both Everton and West Ham, however Barcelona will not sell the 28-year-old for anything less than £16m, reports Spanish newspaper Diario Sport.

Manuel Neuer: Chelsea are interested in signing the veteran goalkeeper from Bayern Munich, according to German publication Bild.

Arturo Vidal: The 32-year-old Barcelona midfielder will be allowed to join Inter Milan in the summer, reports Italian publication Calciomercato.

Marcus Thuram takes a knee after scoring in Bundesliga clash